The Mayor of Boston and SCAPE Landscape Architecture have collaborated on a vision to protect the city’s 47 miles of shoreline against climate change. The scheme lays out strategies which will “increase access and open space along the waterfront while better protecting the city during a major flooding event.” 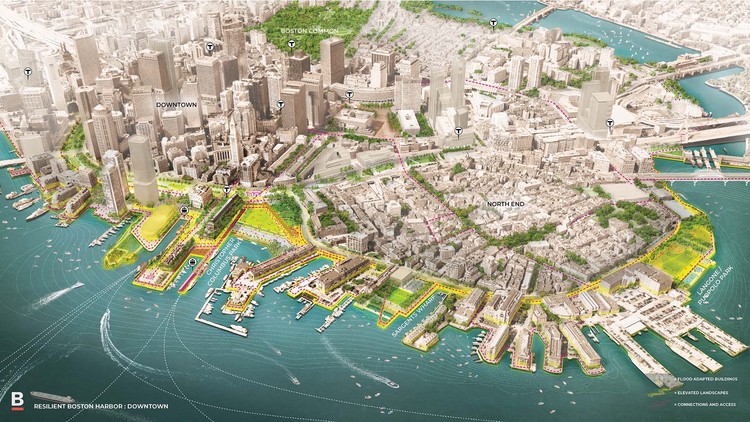 In East Boston, a deployable floodwall system has been designed across the East Boston Greenway, while Constitution Beach will be redesigned to combine flood protection with recreation and access. Key transport corridors such as Bennington Street and Main Street will be elevated, with $4.8 million in funding already committed.

The North End will protect Boston’s financial center, historic waterfront, and tourist destinations. A series of parks including Christopher Columbus Park will be elevated to protect against flooding, as will the Harborwalk. The Long Wharf will be redesigned as a gateway for water transportation.

The South Boston plan identifies flood pathways to the city’s key residential districts, with responses including a re-envisioned Fort Point Channel, and the completion of the Emerald Necklace from Franklin Park to Moakley Park to increase waterfront access. Meanwhile, the Dorchester Waterfront will be redesigned to be resilient, accessible, and connected to the city.

We're not just planning for the next storm we'll face, we're planning for the storms the next generation will face. A resilient, climate-ready Boston Harbor presents an opportunity to protect Boston, connect Boston, and enhance Boston, now and for the future. As we enter a new era in our Harbor's history, Boston can show the world that resilience is not only the ability to survive adversity but to emerge even stronger than before. That's the promise of a Resilient Boston.
-Mayor Martin J. Walsh of Boston

News via: City of Boston 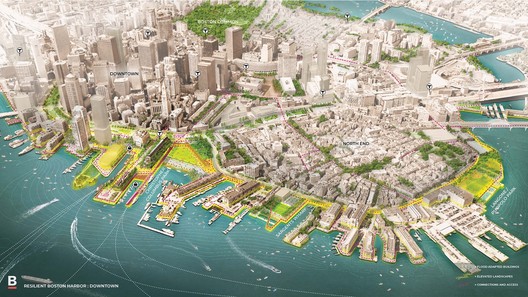