Los Angeles-based KTGY Architecture + Planning’s Research and Development studio has unveiled an idea to reuse millions of square feet of empty retail stores as housing for the homeless. The “Re-Habit” concept calls for the installation of bathrooms, dining, sleeping, gardening, and job training facilities, transforming obsolete big-box stores into agents of social change.

The concept comes at a time when vast big box stores such as Macy’s, JC Penney, and Sears are closing in record numbers, leaving large vacant footprints throughout the urban landscape. 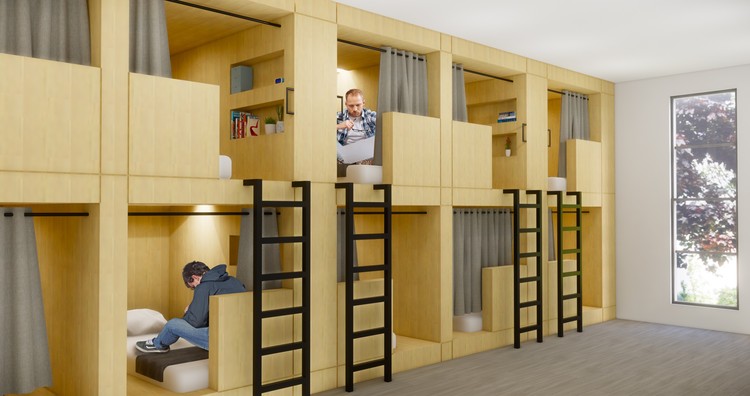 As a case study, KTGY has proposed the transformation of a typical 86,000-square-foot anchor store typology common to large retail outlets. With 35% of the U.S. homeless population unsheltered, the proposal offers three sizes of sleeping rooms: 20-bed pods, 12-bed pods, and 2-bed units.

The mixed-use scheme includes job training, services, and recreational space, crowned by an extensive roof garden. On the rooftop garden, residents can grow fresh ingredients to be used in the residential kitchen and food shops, where occupants rotate cleaning, cooking, and housekeeping chores.

The bed pod system is designed to allow residents to increase their independence and privacy the longer they stay within the program. The modular units were designed by KTGY following consultations with the Long Beach Rescue Mission in Southern California, a state where 68% of homeless people are unsheltered.

With big box stores such as Macy’s, JC Penney and Sears closing in record numbers, repurposing such vacant spaces becomes increasingly necessary. At the same time, the housing affordability crisis and other factors are driving up demand to house and service homeless individuals. Re-Habit offers one adaptive-reuse solution for multiple problems.
- Marissa Kasdan, Senior Designer, KTGY

The Re-Habit scheme is one of many solutions and responses architects have generated to the universal issue of homelessness. In 2015, James Furzer and Spatial Design Architects produced a series of pods that can be attached to ideally government-owned sites or connected to form a community of structures.

A similar scheme was produced this year by New York-based Framlab, exploiting unused space found on the blank sidewalls of buildings in New York City.

Longer-term solutions have included We architecture + Erik Juul’s urban garden and housing, transforming a vacant lot in Copenhagen into a structure to provide accommodation for the homeless. Meanwhile, in Los Angeles, LOHA’s supportive housing complex is focused on creating a comfortable community environment, by integrating the building with the surrounding neighborhood.

Among our previous coverage of the relationship between architecture and the homeless crisis, is a recent editorial exploring the variety of approaches around the world. 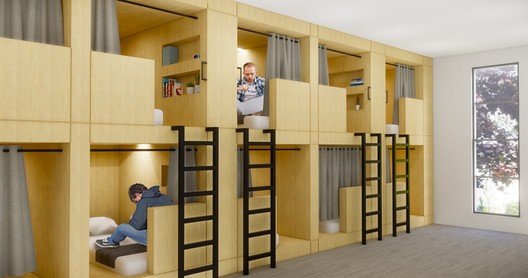