Medellin’s renaissance is one for architecture’s storybooks. After decades of mundane violence, the city today is not only (comparatively) peaceful but a world-class architectural hub. Indeed, many cite the city’s urban development as a factor in its rebirth. But Medellin’s success sometimes overshadows that of neighbouring (and capital) city, Bogota.

Boasting an equally strong architectural legacy, Bogota’s architectural scene today is dominated by local firms invested in reinventing the civic experience of the capital. One of the most notable - and controversial - projects has been the central Bicentenario Park. Led by El Equipo Mazzanti (known for their Santa Fe de Bogota Foundation), the park shrewdly combines public space and infrastructure to create a modern public space that draws upon the country’s legacy.

But for all the good intentions, it wasn't smooth sailing to get the park built. Officially kicked off in 2011 following a public tender process, designs stalled for years amidst fights over heritage and construction costs. Preservationists were concerned that the massive development would harm the legacy of modernist architect Rogelio Salmona; locals balked at the funding required and public disruption that would result. The park’s success today - both architecturally and publicly - is an inspiration for new development in the capital.

You can read the full history of the park in Metropolis Magazine. 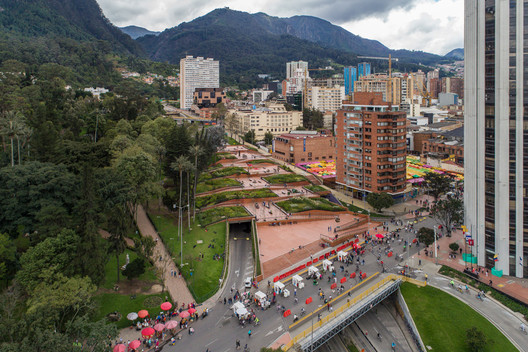