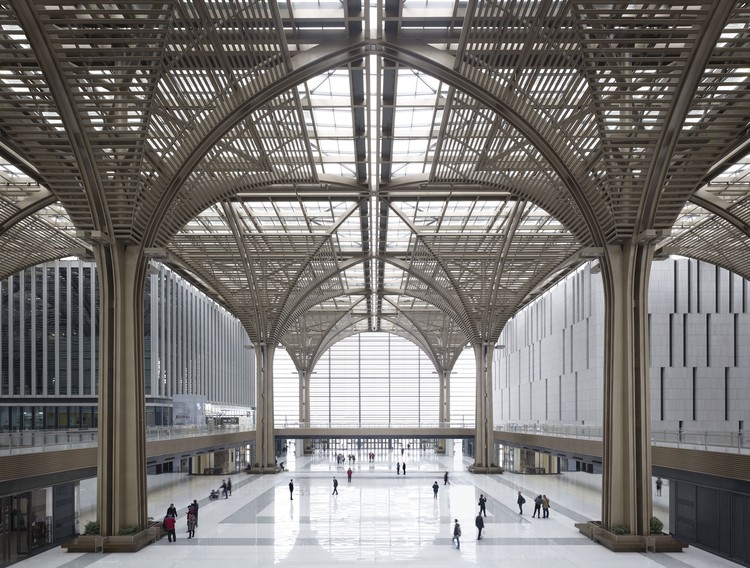 Text description provided by the architects. The Binhai Cultural Center at Tianjin, the metropolis in the east of China, which includes five cultural buildings by international architects, has been created to a masterplan by Architects von Gerkan, Marg and Partners (gmp). With the concept of a roofed-over cultural concourse, gmp has created a specific typology for this unique project. The inverted umbrella-like structures are a distinct architectural element and unify the art and cultural buildings that were designed by different architectural practices.

For years, China’s metropolitan areas have been growing at a breathtaking rate. In many instances the munic- ipalities are redefining their urban parameters with conspicuous development projects. Since 2010, the Binhai New Area in the eastern Chinese port city of Tianjin has been formed by combining three districts into one. In the midst of the quarter, the Tianjin Binhai Cultural Center comprises five cultural institutions. gmp was responsible for the unusual urban design concept and, in addition, has designed the Museum of Modern Art. Four international architectural practices designed the other cultural buildings: a library (MVRDV), a Science & Technology Museum (Bernhard Tschumi Architects), a theater (Revery Architecture, previously Bing Thom Architects), and a Citizens’ Center (Hua Hui Architects).

The masterplan for the project defines uniform building lines, roof lines, and the depth of the individual build- ings and in that way creates a unified ensemble of the different cultural buildings by architects from China, Europe, and North America. The cultural buildings are connected by a roofed-over cultural concourse that functions as the spine of the Center. The museum, exhibition, and event buildings are placed on both sides of the 330 meter long and 25 meter wide main axis that runs from north to south. The east/west axis, with a length of 100 meters, is significantly shorter, although with a width of 60 meters it is more than twice as wide and is used as a central plaza for events and temporary exhibitions.

The cultural concourse is roofed over by 30 meter high inverted umbrella-like structures supported on 26 individual steel columns. The columns are retained in the ground at their base. This lofty construction provides the Tianjin Binhai Cultural Center with its own unique architectural feature whilst allowing the style of each of the different cultural buildings to shine. The slender steel columns support the loads from the glazed flat roof and contain the downpipes for draining the roof area. Horizontal aluminum louvers filter the incoming light and provide solar screening.

Visitors can stroll along the concourse on two levels: the upper level connects the different cultural buildings and, at street level, shops and eateries round off the available services. The two levels are interconnected via numerous staircases, allowing visitors to move about horizontally and vertically along the cultural concourse and to choose between art and shops at their leisure.

“In essence, the project is an absolute experiment. In contrast to the cultural center in Tianjin city itself, which was completed in 2012 with the participation of our practice and in which an extensive park combines the individual cultural buildings, in Binhai it is the interior concourse with its cover of inverted umbrellas that gives the Cultural Center its identity.” – Stephan Schütz, Partner 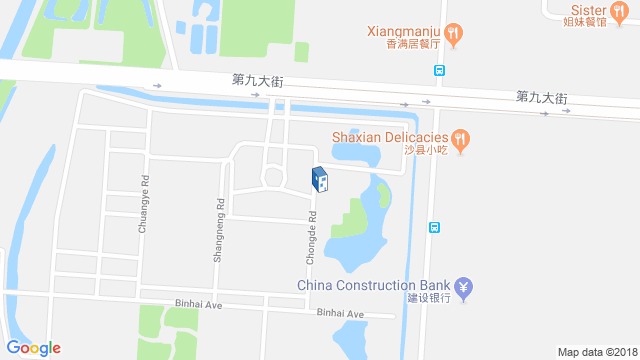 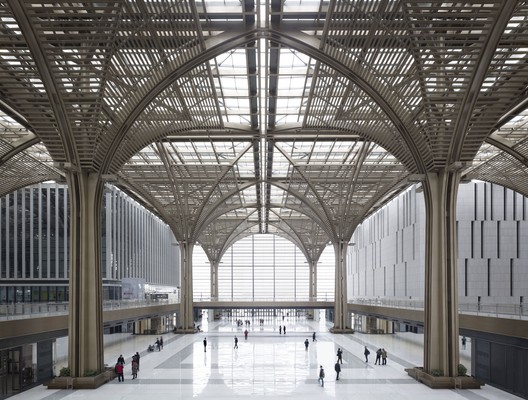