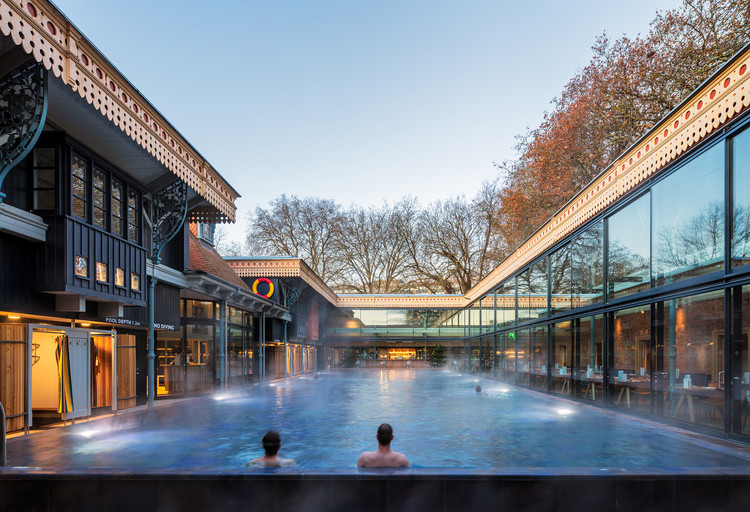 Text description provided by the architects. Thames Lido, formerly King's Meadow Baths, was built in 1902 as a Ladies only swimming pool beside the Thames in King's Meadow, Reading. By the time work started in 2014 the building had been unused for forty years and was a particularly sorry state. The team that successfully brought Bristol's Clifton Lido back from a similar state of decay were invited to do a similar resurrection. Three years later the small site team had completed a meticulous renovation, inserted a dozen new rooms for a Spa, enclosed a new restaurant and added a new ‘west wing’ containing kitchens and a function room. From the outset the aim had been to keep as much of the original building as possible.

The original building was an octagonal oblong of mostly blank brick walls giving suitable privacy for Edwardian lady bathers, but by the early 21st century a more open character was wanted and there are now numerous glimpses into the interior, from the riverside and through the Spa and Restaurant entrances. Most of the open poolside space was enclosed with double height glazing, in order to provide suitable spaces for the Spa and restaurants proposed. Along the south side of the pool new timber cladding and bay windows are carefully inserted, at first floor level, in among the elaborate columns and trusses. All the roofs were replaced, while the existing elaborate timber detailing was carefully repaired and reinstated, ensuring the richness of Edwardian detail has survived the building's renovation. On the north side a new service corridor was added, along the rear, brining multiple operational benefits. The Octagon previously hidden, has become a celebrated focal point. Traditional changing cubicles are provided poolside. The pool itself, sits inside the larger and deeper original, the water level is raised 400 mm above the surrounds giving a more enjoyable relationship between swimmers and diners and making pool access easier for the less able.

In general new work, such as the double height glazing and the new west wing, is deliberately differentiated from the old, but in the Spa whose rooms are intimately entwined with the historic fabric, the palette of robust timber frame and boarded panelling is applied to the new as well as the repaired. Each Spa room has a dormer, providing pool and sky views, which is picked out in brilliant contrasting colours; meticulous restoration can be a little dull, but not here! The care and craftsmanship in the restoration is also applied to the new work and extension, from large steelwork assemblies for the glazing, in situ fair-faced concrete and new brickwork blending reused and new Imperial size bricks, to the new timber stairs and the timber-lined Function Room. The rich detail of the original is echoed, though not copied, in the new. The old King's Meadow Baths have waited a long time for a new lease of life, and finally, this handsome Edwardian pavilion is back in action. 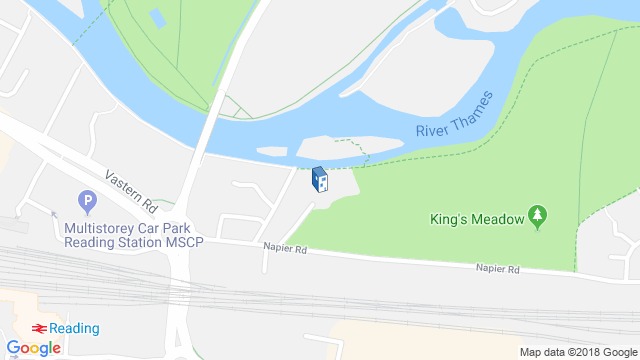