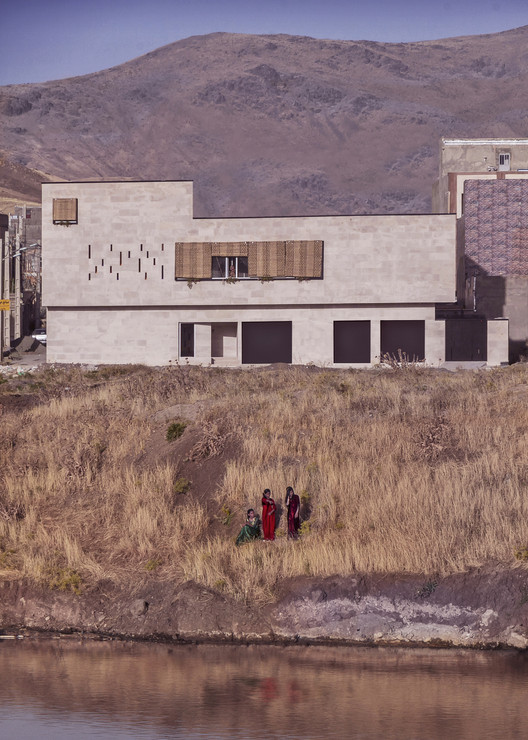 Text description provided by the architects. The fundamental challenge of the peoples of small towns with agricultural careers is the dichotomy between urban and rural life.
The Majority of these people have some kind of service job in the city and practice their ancestors’ occupations at the same time. They tend to use the possibilities the progress associated with urban life, and at the same time, dream for the nostalgia of living in the countryside. In the "Kamyaran House" project, the bipolarity of life [and, in fact, the wishes of the employer] has been the foundation of the design process.

By examining the employer's dwelling houses in the village, four basic physical-spatial patterns that were linked to rural life were identified: First, the model of the verandah, whose presence as a middle space, faces the main courtyard of the house, is very important for gathering family members in the warm seasons during the day. Then the pattern of the sanitary lay-out seems important because people in the area insist that the toilet should be outside the residential area and in the corner of the yard.

Even in many modern apartments in the city of Kamyaran, the toilet door opens to the communal corridor between units! On the other hand, the pattern of the yard, which was considered a great space for children's play, ritual ceremonies and ancient celebrations such as Last Wednesday of the year (Charshanbeh-souri) and the night of Nowruz, religious ceremonies such as the singing carols could not be ignored. Finally, regarding the occupation of the employer’s father, who was a carpet retailer, the pattern of the closet and the place of recluse for the father, which was a large private room with a colossal cupboard on a corner facing a vast view of the agricultural lands and covered with colorful carpets and rugs, the last loop of the project was completed.

The Bayezprneh River runs along the north-south axis of Kamyaran City. The project area is situated on the broadest part of the river ("Lake of the City") so that its western part is parallel to the river. Based on the location of the land and its small dimensions, we arranged four patterns of rural house levels in the urban housing section.

We use second grade cut-broken stones which was more similar to the untreated rocks used for the village houses. And for shaders, we used Cheekh, a native shading. Colored and shaded glasses along with Cheekh show different behaviors with changing seasons and hours.

Cheekh is originally a kind of native roof-cover woven with goat's hair. It is water proof and has a long-term resistance to direct sunlight. Goat's hair also has interesting properties: it is loose in the warm season and the straws are spaced apart allowing the air to flow inside, and it contracts in the cold season pulling the straws together blocking airflow. It acts as an insulator against falling autumn rains and cold winter weather influences. Also, the presence of cheekh causes the sun's radiation to be controlled.