Finnish office Lahdelma & Mahlamäki architects have won the competition to design a new high-rise district in Helsinki. Proposing a cluster of public space and triangular plan towers, the firm will see the phased construction of the high-density, mixed-use towers and public space alongside construction firm YIT. Located in the Pasila district, the project is called Trigoni as a reference to the triangular plan of the towers and the desire to create strong connections around sustainable development. 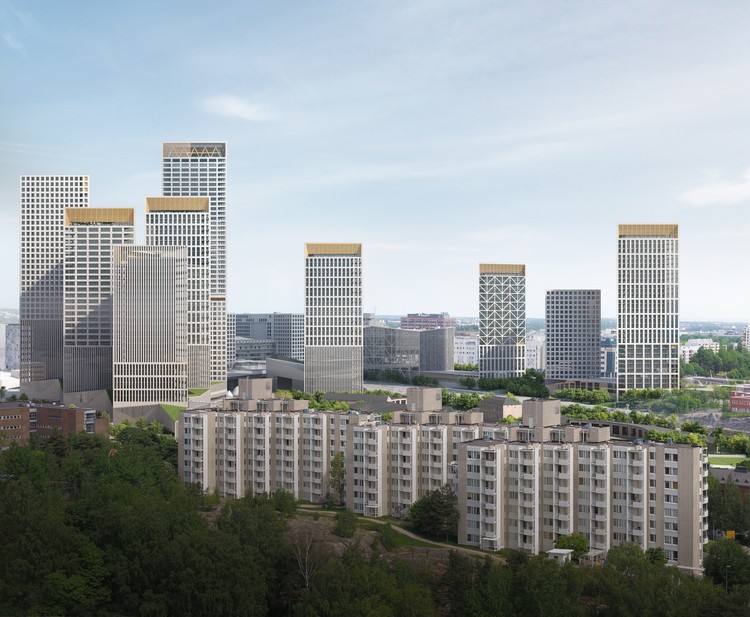 Construction of the project will be phases, beginning with the ‘starting block’, the first tower of 180 meters and 51 floors, and a second at 130 metres and 40 floors. Later phased development of the scheme will bring more mid- to high-rise buildings, towers and public space. Up to ten buildings will be situated around the perimeter of the old rail yard, that itself will be turned into park and sports pitches, and the old rail roundhouse is proposed to be renovated into a vibrant cultural center.

Trigoni will join a movement to turn Pasila into a booming cultural, commercial and business-centric district of Helsinki; based around what would become Finland’s busiest transport hub. LM and YIT’s new development will house a whole range of different services including homes, shopping, restaurants, offices, hotel and conference facilities; a mix that will see Trigoni being used all around the clock. Covered and underground routes connect the entire district as a respite from the harsh Finnish winter.

Featuring smart systems, the project will include commercial and transport operators where offices, residents and guests alike are all linked into the same digital platform. The interface with the digital platform can be used for booking a sauna, laundry room or cleaning services – or even to order things from the shops or just find out what’s available. The integrated system also means that the typical hotel services are available to both the guests and the tower block residents alike. At the same time, the concept of public space is extended throughout the towers.The entire southern side of the design area will be developed into a significant recreational and cultural area for all the residents of Pasila.

Trigoni aims to enrich the cityscape of Helsinki and life at the street level; creating uniqueness through elegance and reduction. The clear, triangular, geometric shape of a single tower offers the possibility to create a compact tower group. When combined with efficient interior layouts, a triangular floor plan will offer benefits to a cluster of high-rise towers when oriented with purpose: angling each individually means that views can more easily be directed past one another, more sunlight can be let through to each tower and also the ground.

From the outside Trigoni applies a restrained Scandinavian idiom that fits into the Finnish cityscape. Each façade creates a slightly different identity, with two variations of façade tailored depending on the view that it will create with its backdrop. Denser or lighter spaced rasters, clad in natural stone, fibrous concrete or ceramic tiles, adjust the hues of the towers or highlight their individual characteristics. The end result will be a unified group of similar sculpture-like buildings where each one has its own, unique characteristics. The parts that are shielded from the weather, such as entrance roofs and indents, will include warm-toned wood.

The podium joining the two starting towers will be the main public center of the scheme, creating a sheltered space between the towers that harks back to the market places, squares and streets of a traditional city. Market and service functions, restaurants, and cafes are located in a cozy urban setting. The spaces open towards the streets and the courtyard, forming a lively pedestrian center for the block.