Rogers Stirk Harbour + Partners has been confirmed as designers for an “Urban Living Room” masterplan in the Qianhai area of Shenzhen, China. Formed on already existing reclaimed land, the scheme will feature a 1.2-kilometer elevated sky garden.

The scheme is envisioned as a “heart and a new horizon against which people can orientate themselves” in an emerging urban center.

The sky garden terminates at a major public space to be known as “Performance Park,” featuring an Opera House and Convention Center directly linking the city to Qianhai Bay. Meanwhile, the city edge is celebrated by a distinctive landmark tower.

Qianhai is an exciting and dynamic emerging urban center. Having the opportunity to create this bold and confident intervention will focus the city’s attempt to create a rich and diverse, culturally led public realm. This in itself will become the key element in how the city will naturally grow and develop over the coming years.
-Richard Rogers, Senior Partner, Rogers Stirk Harbour + Partners

News of the scheme comes after Rogers Stirk Harbour + Partners unveiled their Toronto “HUB” Tower, set to become a dominant fixture on the Toronto skyline. 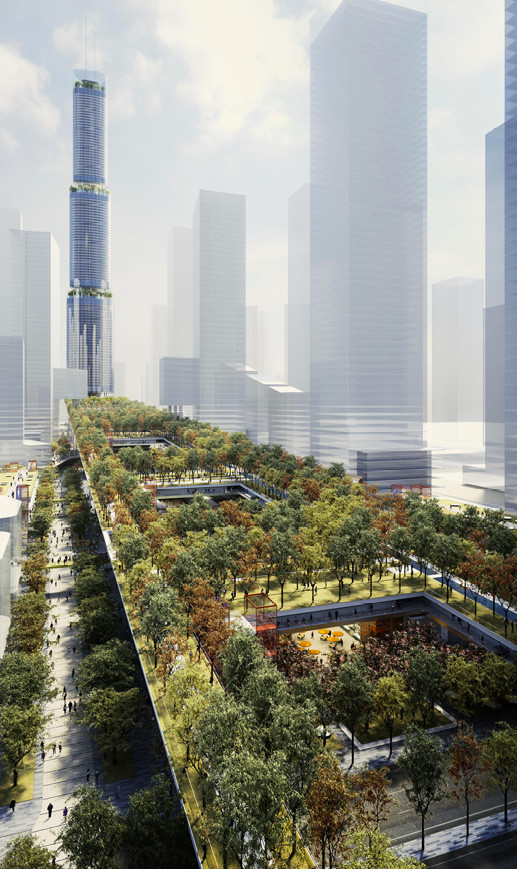