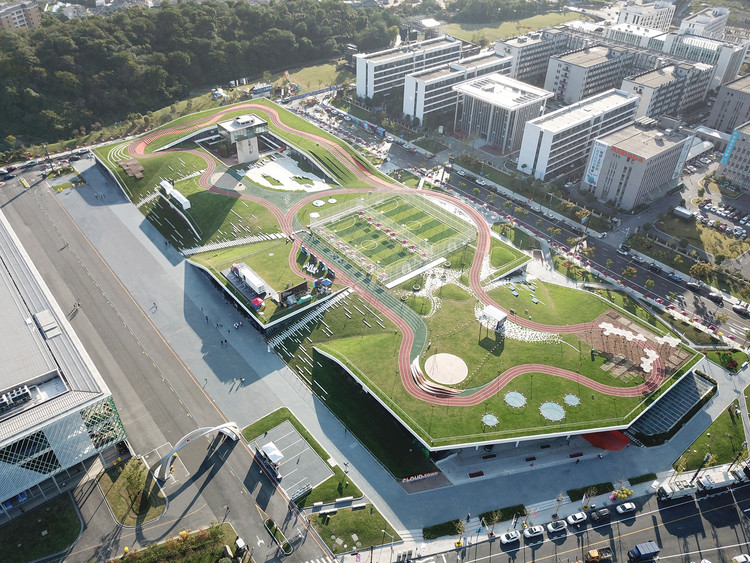 Text description provided by the architects. The project lies in the birthland of characteristic towns——Cloud Town, Hangzhou. For actively embracing imagination, a once unfinished industrial park has now become the industrial hub of cloud computing, big-data and artificial intelligence. The ‘Computing Conference’ held in autumn every year has become the largest-scale scientific and technological fiesta. Oddly enough, the conference was held outdoors several years in a roll simply because of the ‘impropriety’ of available venues. Of course, by no means does ‘impropriety’ suggest those venues were inferior in terms of size or grade, it’s just that the conference founders didn’t want to see people’s imagination being constrained by a venue. Therefore, as the designers of the exhibition center, we intended to break away from past experience and the ‘desire to create’, contemplating and making breakthroughs from its origin instead of constructing yet another generic exhibition center on this land.

By nature, an exhibition center is a vehicle for urban public cultural life. In fact, exhibition centers all over the country tend to adopt a pompous design, being pinned with the hope that their dimensions and unique looks could fully highlight the ambition of a city. However, from the standpoint of an individual, these features often intimidate people, so much so as to discourage them and detach from the life of the populace. Therefore, in the process of designing the first-stage of Cloud Town Exhibition Center in 2015, we came up with an atypical exhibition center design, abandoning specific models and so-called sense of ceremony, thus making the long-standing image of a ‘high above’ out-of-reach exhibition center nowhere to be found around here. The replacements are refreshingly concise exterior, blurred boundaries and a fully open space accessible for anyone.

The free, equal, easy and open experiences epitomize the town’s atmosphere, giving every visitor a sense of belonging and joy. In leisure time, large numbers of people come here every day to take a walk, rest, meet up and play around. Everywhere you can see their presence. There are even spontaneous shows going on. Therefore, the building turned from a makeshift structure into a permanent building representing the entrepreneurial spirit of the town.

Two years later, in 2017, due to the increased scale of ‘Computing Conference’, a three-times larger second-stage Cloud Town exhibition center was to be constructed opposite to the first-stage structure. Just when everyone expected an even larger ‘iconic’ building, we designed it as a short ‘3D-Park’. There was no modelling to begin with. It didn’t even strike people as a building. The plan caused instant controversy and opposition. However, hidden behind it was our reimagination of urban large-scale public building design paradigm, which had already gone above and beyond an exhibition center itself.

Today, almost every city owns an exhibition center, which requires the support of a huge amount of urban resources. However, only few people know that even the busiest exhibition centers merely have a usage rate of 40%, meaning that they lie idle at least 200 days a year. The usage rate of most other exhibition centers is below 10%. On the flip side, the inertial thinking and typical characters of traditional exhibition centers make them hard to be utilized in any other ways, causing a huge waste of resources invisibly. As such, we start to question ourselves: is it possible to facilitate ordinary people’s life on the premise of fulfilling the original functions of an exhibition center? Can higher resource utilization rate be achieved, by sharing the same body with other types of urban public facilities or by integration of some sorts?

All around the building sit a multitude of gentle grassy slopes, and thus the whole roof appears to be an extension of the horizon, openly welcoming people to walk onto the rooftop. In comparison to raising up the building and returning the bottom level to the public in the first-stage design, the second stage design returns all the land occupied by the building to the public, in a more intriguing and environmentally-friendly ‘3D-Park’ manner.

In order to control the height of the roof so that people can easily access, the design embedded one-third of the 9-meter-high exhibition hall underground, which makes people walk down when entering the venue. This has created a strong contrast from the ceremonial large step of the previous convention centers. The building almost filled the entire second phase due to the low building height, and both building density and greening ratio break through the existing design specifications (even if the roof was covered with green land, it could only convert 20% of the total greening demand). This idea has once again suffered a huge controversy, and several times it was asked to overthrow and redo it. Fortunately, Hangzhou City is willing to accept the imagination and listen to the architect's ideas, even more willing to create more benefits for the people's livelihood. Under the concerted efforts, this several-time "death penalty" plan passed the various approvals in a reasonable and compliant manner.

The rooftop isn’t just a park. We also introduced ten-odd types of fun-having facilities such as football field, watchtower, sand pit, studio theatre, roller skating platform, community vegetable garden, pavilion and hopscotch, all of which are joined by a 760 meters long winding rooftop runway. All these seemingly non-exhibition-center-related designs attract numerous top-level conferences to be held here. On usual days, large numbers of people come here every day to exercise, rest and play around. With spontaneous community activities such as township concert, football match, carnival and marathon going on, the exhibition center has become the place to be for workers and inhabitants of the town on a daily basis.

In the corner, previously monotonous freight ramp has been redesigned into an undulated origami shape. People utilize it in all sorts of ways——a roller-skate platform for the youngsters or a slide for kids.

The interior of the building no longer serves solely as an exhibition hall. Through integration of space and functions, we confer upon it a new property – ‘Sports-Warehouse’. In absence of a conference, the exhibition hall can be immediately transformed into facilities for a series of sports such as basketball, badminton, table tennis, fitness training and etc., with the addition of closet, showering and professional mechanical/electrical equipment, making it a hustling and bustling place every day. So much so that the demand is well in excess of its capacity. 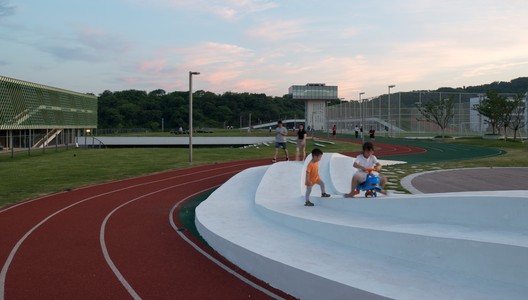 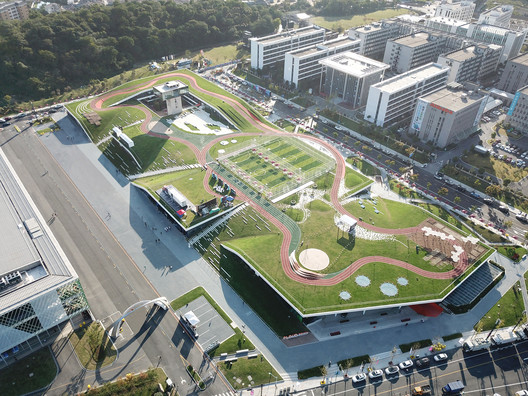