Save
Japanese Robot Capable of Installing Drywall by Itself

In a video from the Advanced IST Institute we can see the robot install drywall, including drilling it into place. “By utilizing HRP-5P as a development platform of industry-academia collaboration, it is expected that research and development for practical use of humanoid robots in building construction sites and assembly of large structures such as aircraft and ships will be accelerated,” write the creators.

“It is expected that many industries such as the construction industry will fall into serious manual shortages in the future, and it is urgent to solve this problem by robot technology. Also, at work sites assembling very large structures such as building sites and assembling of aircraft / ships, workers are carrying out dangerous heavy work, and it is desired to replace these tasks with robot technology. However, at the assembly site of these large structures, it is difficult to develop a work environment tailored to the robot, and the introduction of robots has not progressed.”

The Advanced IST Institute team aims to work with private companies to take the robot design and use it as a development platform for further breakthroughs. 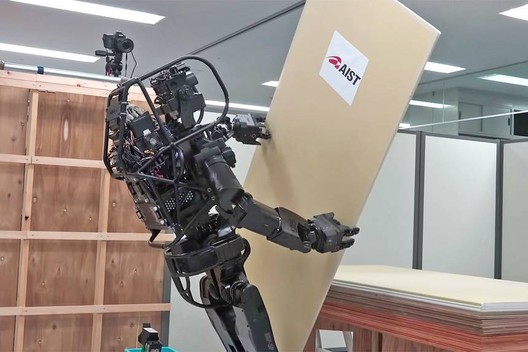