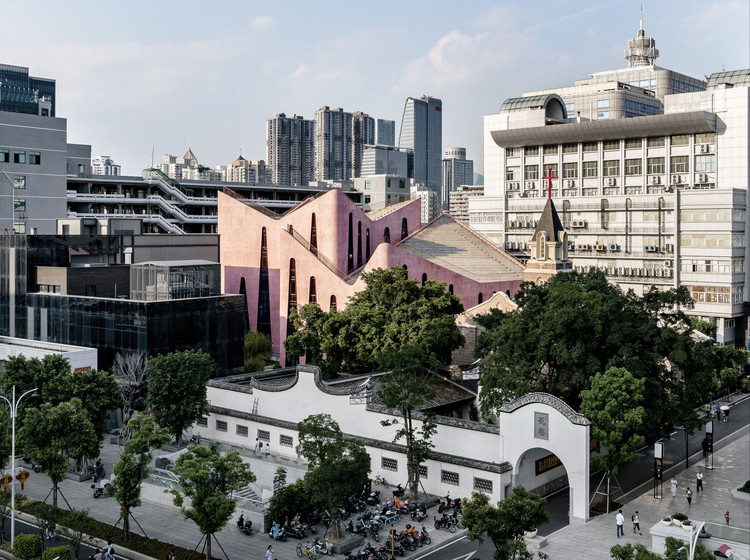 Repression and Rebirth: A Christian Minority in a Typical Chinese City.
Since its construction in 1938 Huaxiang Church became witness to radical transformations: From decades of deterioration to unprecedented urban growth; from complete suppression of religion to a ten-fold growth in the number of Christians. Today, it finds itself in a maze of high-rises. In need for additional space, its congregation decided to build a community centre adjacent to the church.

A CHURCH FOR THE EYE OF THE STORM: Conflicts and Contradictions of Place and Brief.
The conditions imposed on the project were extraordinary: Firstly, the spatial requirements conflicted with the heritage-authority’s height and GFA restrictions. Secondly, the site’s isolated character - enclosed by an uncommunicative set of buildings high and low, modern and traditional, Eastern and Western - demanded an innovative approach regarding the relationship to the surrounding.

HARMONIZING EVOLUTION: Rethinking Tradition to Embody a Changed Self-Perception.
Our design convinced client and authorities alike, as it harmonizes such imbalances by adopting the role of urban mediator: Folding its contours and modulating its vertical development in a continuous up-and-down movement, the volume is visually scaled down into fragments, allowing this seven-times larger structure to relate in proportion and silhouette to the tiny church at its side. The fragments decrease in height the closer they are to the historic building, showcasing its bell tower and evoking the impression of an organically grown sky line.

The community centre’s façade makes a counterstatement to the gloss and shine of the curtain walls encircling it. It is finished in a red granite similar to the old church’s – tumbled down to smooth pebbles and applied to the walls using a pebble dash technique once typical for the local architecture and now almost entirely forgotten.

In a religious sense, this infinitude of pebbles translates into matter the dual nature of the word “Church”, which refers not only to the single building itself, but also to the sum of all individual Christians.On a human level, it gives the Community Centre a haptic quality, warm and comforting to the human hand and always provoking a smile on the faces of adults and children who touch it. Aesthetically, it showcases the beauty that one can find in supposedly outdated materials, traditional techniques and handcraft, and proves that in an environment of extremes, sometimes humility stands out most clearly.

Functionally, the organization of the building corresponds to the client’s needs by providing a range of multifunctional spaces. As a central piece of this strategy, the roof top areas are conceived as publicly accessible open-air amphitheaters allowing the community to hold outdoor. Seen from the neighbouring buildings, however, it constitutes a stage of urban proportions, upon which the community demonstrates its faith and shares its joy with the city.

The community centre therefore embodies a change in the congregation’s self-perception and in their mission as Chinese Christians: from a protective minority that hid in seclusion, to a community that now wants to be visible, open its heart to the world, reach out and invite to join. Only a few months after completion the community centre has already become a popular hang-out place for the youth and serves as viewing platform from which locals and tourists enjoy an unobstructed view onto the city’s historic district. 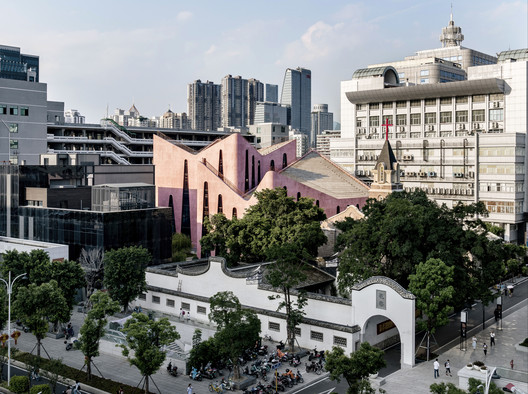