The New York firm WXY and the Brooklyn Navy Yard Development Corporation have proposed vertical manufacturing buildings in a new Navy Yard masterplan. A series of renderings show plans for the next phase of development, including high-rise structures with 5.1 million square feet of urban industrial space. The $2.5 billion masterplan was first announced in January 2018, and as Curbed NY reports, the master plan and rezoning calls for new manufacturing buildings, increased public access, and more educational programming. 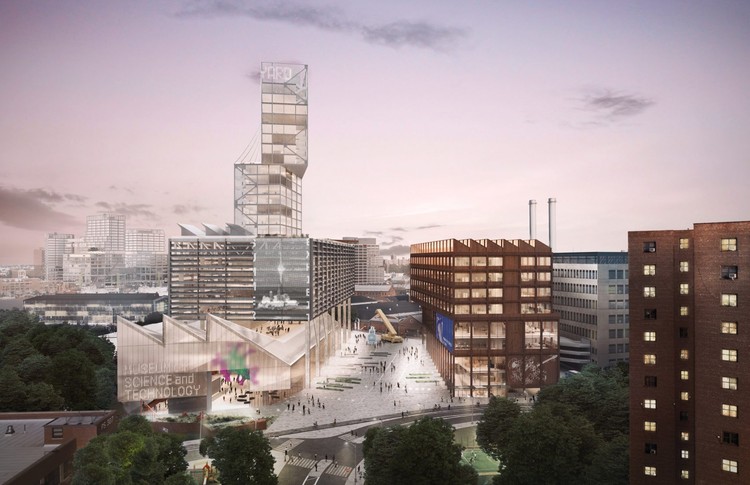 The 30-year masterplan for the complex will be constructed on three open lots adjacent to Navy Street, Kent Avenue, and Flushing Avenue. The plan divides the 300-acre Navy Yard into districts. The BNYDC plans to add open space and a range of amenities to the Yard. The “Vertical Manufacturing Building” includes three scales of space. The ground level consists of loading docks, parking, and showrooms which act as a buffer for flooding. All of the mechanical systems are located on the second floor. The “XL” manufacturing floors, designed for large and heavy equipment, are located two to three stories above the ground. Above the XL floors are light-industrial spaces with 15-foot-tall ceilings. On the uppermost floors is creative office space with 12-foot-high ceilings.

As the adaptive reuse of old warehouses and ship-building facilities has already taken place, the plan aims to create 10,000 additional jobs. "Forward-thinking cities like New York are using urban design to grow districts that support new kinds of jobs in urban industrial and maker settings," said WXY managing principal Adam Lubinsky. "The Brooklyn Navy Yard is leading the way, showing how to create and integrate valuable public space and amenities, multi-modal transit and streets, and state-of-the-art vertical manufacturing buildings, which will boost the yard's economic impact."

The project may also include a public pedestrian flyover to the NYC Ferry stop, scheduled to open early next year. Other improvements to the site include wayfinding, lighting and streetscaping, as well as better transportation in and around the area for bikes, car-sharing, and shuttle buses. "The yard is quickly becoming a national model for bringing sustainable manufacturing jobs back to cities, and our masterplan lays out a comprehensive vision to bring the campus to its full potential over the coming decades," said BNYDC president and CEO, David Ehrenberg.

Located on a bend in the East River, the site was first taken over in 1801 by the US Navy, which operated there until 1966. The conversion of the Brooklyn Navy Yard from a decommissioned shipyard to an industrial park aims to create a new model for New York City’s next manufacturing economy. At at a larger scale, the masterplan and rezoning hopes to rethink how cities design urban manufacturing districts across America.