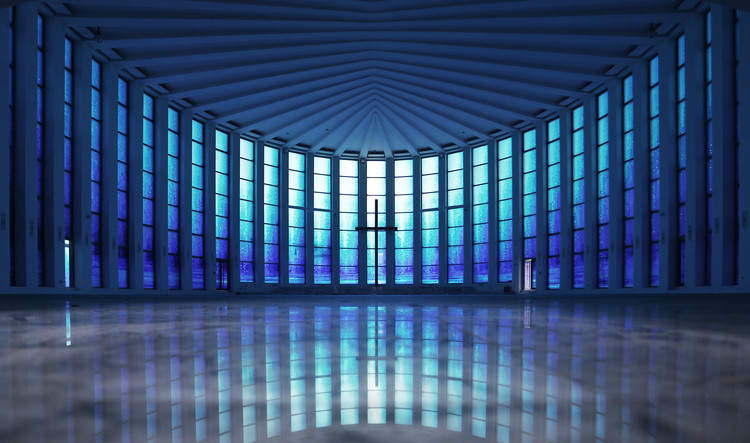 At the Battlezone Between City and Countryside
Luoyuan is a county-town in Fujian, a province famous for tea terraces, its Hakka-minority and their distinct ring-shaped architecture, the so-called “Tulou”. Currently, the town is expanding quickly, replacing the vernacular settlements and with factories and residential districts. Since 2011 the Anglican Congregation of Luoyuan is devoting its resources to building a church in one of these districts.

A Little Community and Its Mission
Anticipating many young couples with children to live in the future residential neighbourhoods, the new church distinctly addresses young believers’ need of a safe and nurturing environment for their children. Its differentiated program includes not only individual service venues for parents and children, but also activity rooms for all age groups, admin as well as a library and a tea house. The particular challenge of this project lies in overcoming two dichotomies: On one hand, to integrate the complex and mundane requirements of such a mixed-use building with the dignified presence of a place of worship. On the other, to retain a sense of tradition and local authenticity in this increasingly anonymous environment, while making an iconic and future-oriented statement for the fast-growing number of Christians in Fujian’s countryside.

Transcending the Desolation through both Company and Solitude
Placed in the midst of such desolation, the new sanctuary must become a refuge from the torments of a changing world, a place where those in need can find the peace to heal. The realized design therefore emulates characteristics that local believers are familiar with: Typological elements of the vernacular Tulou, such as its concentric organization around a courtyard with pavilion or features of the adjacent countryside such as tea terraces surrounding the church. In this manner the church embodies the traditional community-based lifestyle – retaining a glimpse of the place ‘s fading rural identity - and creates an environment where believers can feel in communion with their Christian family while their children learn and play safely within a protected environment.

Conversely, the service hall represents a space of meditative seclusion composed of two facades with a total of 107 707 individual pieces of traditional stained glass. The depicted artwork “De Profundis” was designed by the architect in union with the space; it exudes an atmosphere of profound blue, carrying believers away to a metaphorical place deep down at the bottom of the ocean, in which daunting darkness is dispersed by an aura of divine light. In the future the void between inner and outer facades will be used to artificially light up the glass, thus transforming the church at night into a beacon shining inwards and outwards. With 1412 sqm of surface area, it constitutes the largest stained-glass façade in China and one of the largest of its kind in the world. After more than seven years of construction the church is now nearly completed and will be consecrated by Spring 2019. 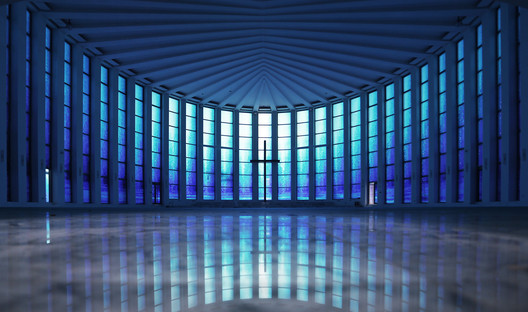