“Architects don’t even look at it as an opportunity to put any living experience there…we can open that up” muses Sankarshan Murthy, former Tesla and Apple Watch engineer.

Recently featured in The New York Times, Bumblebee Spaces breaks the third dimension in pursuit of comfortable, efficient living, creating what they describe as “a robotic A.I. butler furniture system that deploys down from overhead by tapping a control pad or by voice command.”

Drawing inspiration from minimalism and the KonMari anti-clutter movement, the Bumblebee system also creates a log of items kept in its timber storage cubes for long periods of time, gently reminding the user of when it may be time to let go of their long-forgotten possessions.

In a further measure of efficiency and declutter, the Bumblebee system also enables large furniture such as beds to be stored in the ceiling as needed. For those less accustomed to the idea of falling cabinets, the system also has an inbuilt system of sensors, pausing the process if somebody passes directly beneath.

Learn more about Bumblebee Spaces from the official website here. 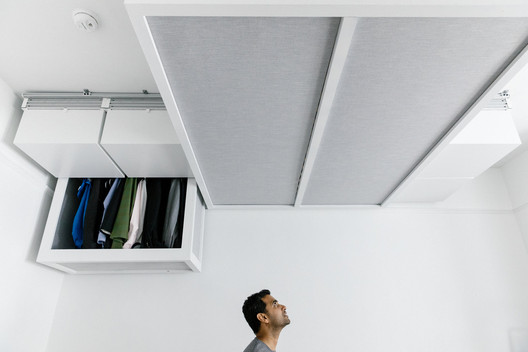