Pelli Clarke Pelli’s Salesforce Transit Center was abruptly closed on Tuesday due to the discovery of a cracked steel beam. As reported by the San Francisco Chronicle, the cracked beam was spotted by workers installing ceiling panels at the center’s eastern third-floor bus platform, with safety concerns resulting in the terminal’s closure.

Designed by Pelli Clarke Pelli, and located adjacent to the firm’s Salesforce Tower, the $2.2 billion transportation hub broke ground in April 2013, and was opened earlier this year.

The crack is reported to be on a 6.5-foot-deep steel beam on the third floor, one of many that support the park above the bus station. In response, authorities stated they would inspect all steel beams in the center, though Mark Zabaneh, Executive Director of the Transbay Joint Powers Authority, believes the crack is a “localized issue” with “no information that suggests it is widespread.”

Nevertheless, all buses to and from the center were rerouted, with the adjacent section of Fremont Street also closed until at least noon on Wednesday.

The beam is cracked, so the behavior of the beam is unpredictable. We will be working tonight and tomorrow morning to get a better understanding of the cause of the crack.
-Mark Zabaneh, Executive Director, Transbay Joint Powers Authority

The crack was discovered on the same day that engineers were inspecting a cracked window on the adjacent Millennium Tower, which has sunk 18 inches since its 2009 opening. Transit authorities have given assurances that the cracked beam is not related to the sinking tower, or its cracked window.

Learn more about the Salesforce Transit Center from our project article here. 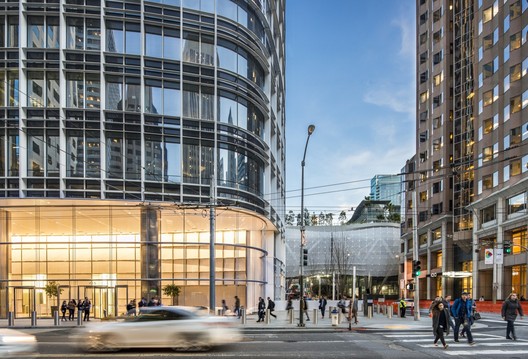