Save
Panpo-ri Residence / a round architects 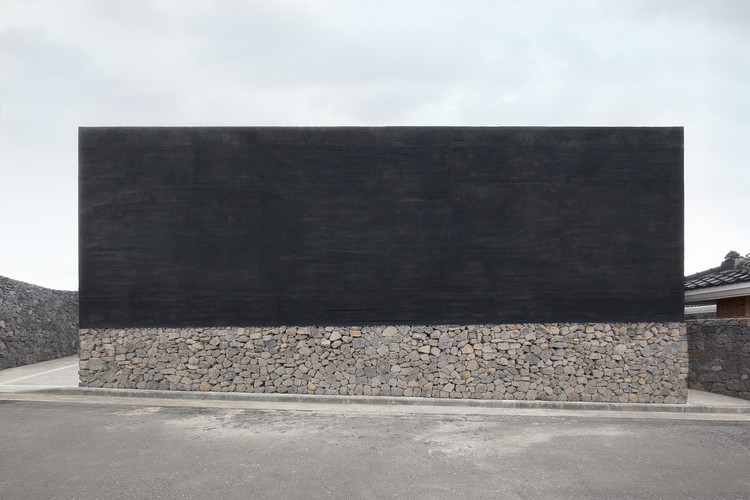 Climate of Jeju
The earth around the site is flat and firm. Rough sea wind coming from the South Pacific trimmed the earth for a long time into simple and solid shape. The sceneries of Jeju Island have some things in common, but also have their own characteristics according to the region. The site, Panpo-ri, has the largest number of wind turbines, representing the strong wind.

We started the project with a few starting points dealing with the climate. First was making use of the porous stone wall, and lowering the building site than the surrounding earth in order not to fight with the wind. Second, was locating the large window taking place in the southern wall for sufficient light, and installing canopies over 2m long to deal with the strong western sunlight. Lastly, by building a wall between the building and road on the east and north side, lighting and ventilation were enabled. Likewise, we observed the climate of Jeju and reflected the result in the design.

Layers of Senses
We wanted people to feel the senses which are hard to meet in the city center. We’ve been slowly losing our other senses while being buried in the flood of visual information. The narrow, long space that goes down through the entrance act like a musical instrument. Hard material amplifies the sound and comes in various expressions as nature and materials overlap. We believe a single material holds over a thousand potentials and even more when it interacts with other. Different materials (concrete, basalt, metal) finished in black eliminate visual superiority and materiality comes into the front view. The small and narrow waterway between solid materials varies in sound on each location and leads us to the entrance.

Smooth concrete and rough basalt seem different but also alike in some way. The vine coming up from the bottom is the medium that connects two materials. The light coming in along the surface of the southern wall gives the warmth to the plants. The large door made out of Jeju cedar add warmth as you approach the entrance. The sound of the wind passing between the cedar panels represents the characteristic of the space. As you enter, the sun shines on the hard floor of the yard, and shimmering lights reflected from the water space falls on an inner wall, waking up the stillness. Breeze blow into the lower yard and walls and trees located in west block strong light and wind.

Establishment of relationship
Surrounding sites are mostly vacant at the present, however, we applied different approaches on each side expecting buildings to be constructed in near future. Two elevations facing the road and yard of the northern house are visually blocked and the other two have many windows and open spaces as the adequate distance is secured by the yard. Open space towards south confronts high wall for the privacy of the house located in front, and spaces located on the west with low sunlight are in loose connection with the surroundings through planted trees. 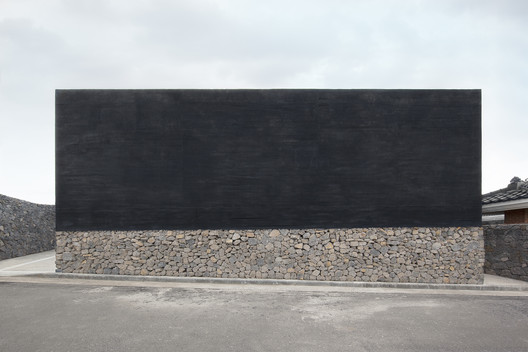