Save
House in the Air / APS - Pablo Senmartin 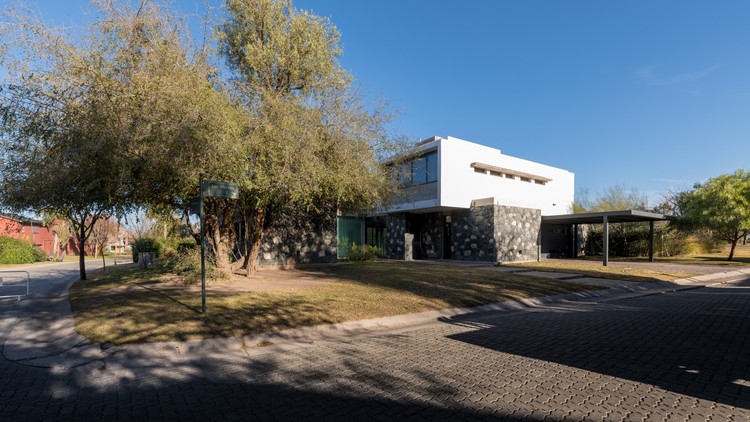 "I'm going to make you a house in the air, so that you live, as that house has no foundations, it has the system that I invented ... and if it does not fly, it does not rise, it will not reach there" .  Rafael Escalona

In the northwest area of ​​the extensive periphery of the city of Córdoba, there is the San Martin natural reserve, around which a series of closed neighborhoods have grown in recent years. In one of these neighborhoods, the studio carried out this house for a family of 5 members. Being away from the center of the city, the program requested by the family included areas of study and work for parents and children, as well as areas of common use that support an intense social life.

The land of 600m2 is located in a corner that contains an old carob tree, which was taken as an opportunity within the structure of the neighborhood, among many fences and walls, to generate a place of reference and encounter, a place-square, from where , you can access both the study area - work of the house, as the kitchen-services sector, as well as the area of ​​multiple use separately depending on the occasion.

From the square, the house works through the articulation of programmatic blocks that are superimposed on each other, a journey is proposed, the house begins its transformation, looking for connections between the various elements of the context, a stone block - pirca , next to the carob tree as an image of link with the landscape of the nature reserve, from this introverted image, solid and simple, it moves towards a transparent, luminous, flexible interior that surrounds a large courtyard with a pool.

This fluidity and inner transparency is achieved by implementing as a guideline the challenge to gravity, placing 2 solid volumes containing the bedrooms, resting on another 2 lightweight rooms of common use, these volumes are displaced, producing a phase shift that arms Transitional spaces, when the supports are hidden, by contrast, they seem to fly, they rise looking for images of the nearby natural reserve. The constructive technique of the reinforced concrete at the service of the concept-idea to reach allows to reach a cantilever of 4.50m x 5.50m by means of a ribbed slab with flat beams of 40cm of height supported on piles of 25x25 cm.

A central vacuum divides the functional program and increases the feeling of weightlessness. The reinforced concrete staircase occupies a central position and crosses the double height, as an articulating reference and as a sculpture within this integrated and fluid space.

The transparent and aerial house, has managed to avoid fences.