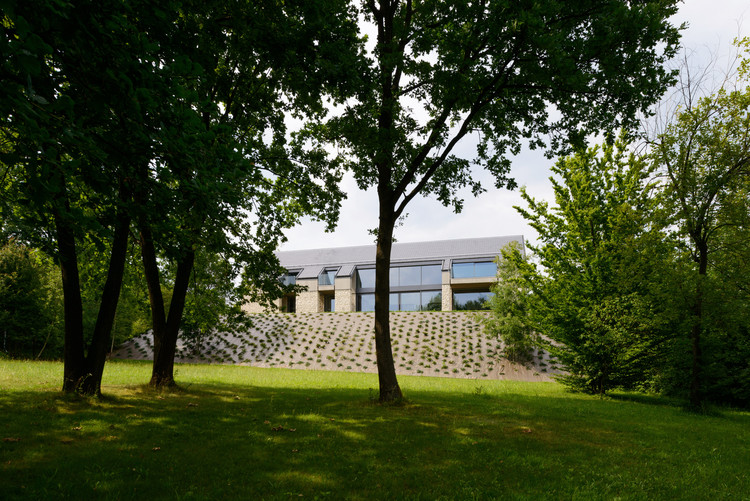 Text description provided by the architects. A manor is an extremely important phenomenon for the Polish identity. For hundreds of years manors have been a characteristic element of the Polish landscape, a depositary of the Polish history and culture, centres of the gentry ethos and customs as well as national traditions and the struggle for the Polish identity. Almost since the very beginning of the state they had been built first as defensive knights dwellings, and later, since the middle of the seventeenth century, as modest – in comparison with palaces - residences of landowners. As compared to other European countries, there were relatively many small landed gentry mansions in Poland. One major threat to our culture and identity in Europe that started after 1939 is the process of removing historical manor houses and parks from the Polish landscape, what implies blurring of patriotic gentry values in the collective consciousness of the society. Polish manors demonstrate a great variety of architectural concepts implemented in different historical periods.

In Grębynice near Kraków, next to the Valley of the Prądnik River and an enclave of the Ojcowski National Park with the ojcowska birch (Betula pendula var. oycowiensis), the world endemit, the Barycz and Saramowicz Architectural Office has built another villa. The area has important historical and cultural aspects here. In the neighbourhood there is the Korzkiew Castle, former Knights’ stronghold dating back to the fourteenth century. Significance of the nearby town of Ojców, a popular health resort but also the centre of national revival on the borders of the then territory under the Russian rule, at the beginning of the last century, is invaluable.

Hence the villa in Grębynice has been given a form which is a far intellectual transposition of the massive archetype of a Polish manor. The building is a modern version of a country house out of town. It has been built using modern methods, relevant to the aesthetic sense of modernity. However, created with the use of state-of-the-art means of architectural expression and wonderful possibilities of modern technology, is by no means a copy of an international style. It is a creative reference to the Polish building tradition.

The villa has a compact, rectangular, slightly elongated floor shape. The archetypal expression of the building and certain symmetry of the composition, with fragments of the construction extended on the sides, recall the shape of the Polish manor house, with a front porch and alcoves. The villa has been built on the archetypal plan of a Polish manor, but everything else in it is modern. The walls of the building being a combination of limestone and quartz sinter are innovative. So is the shiny roof, which gives the house an unearthly, cosmic look. The abstract physiognomy of the villa has been multiplied by its material definition, where the appearance of the roof and the walls has been harmonised and is identical both texturally and chromatically. A stone cladding made of crushed Jura limestone corresponds with the quartz sinter with a vertical print of wooden formwork. The boundary between the plane of the walls and the roof has been obliterated.
The unified, homogeneous form of the villa looks like a prototype embedded in the natural environment.