Text description provided by the architects. Fort York, considered the birthplace of Toronto, is a National Historic Site. It represents the single most important visual and contextual cultural heritage link to British military and social history remaining in the City of Toronto.

In 2009 Patkau Architects, together with Kearns Mancini Architects, won the international design competition to design a new Visitor Centre on the 18 hectare historic site to commemorate the bicentennial of the War of 1812.

The site, once on the shores of Lake Ontario at Garrison Creek, but now isolated from the lake shore due to the expansion of the city, has an immensely rich archaeological past. To the north is Garrison Common, the site of the Battle of York in 1813 and a potentially rich source of archaeological remains. To the south is a historic railways cut and the Gardiner Expressway, a large, unforgiving elevated structure that runs east-west across the southern edge of the site.  To maintain the integrity of the below-ground archaeological resources within Garrison Common and avoid the challenges of building below the Gardiner Expressway, the visitor centre is situated in the narrow interval of previously disturbed land immediately to the north of the expressway.

Lines & Liquid Landscape
The delicate forms of Fort York as a defensive site produce an architecture that is mostly about subtle lines. Existing lines such as the original lakeshore, the lines of fort walls and the lines of sharpened logs are the source of new lines in this project: lines of weathering-steel walls, lines of docks and bridges, lines of light. The grassed defensive moat in front of the fort and the surprisingly low, bermed rampart are both quiet and subtle. They are experienced as a ‘liquid’ rolling of the land, a delicate ‘wave’, but one with severe consequences.

The south boundary of the Common is redefined by the new escarpment of weathering steel. As this wall is not the original line of the defensive landscape, its materiality is decidedly new, a major new infrastructural and landscape-scaled dashed line. The weathering steel escarpment follows the line of the old lakeshore and re-establishes the original sense of a defensive site, stretching across the site to meet the grassed escarpment to the south of Fort York. Joining with the scale of the Gardiner Expressway above, the new wall forms the backdrop to a great new urban space for Toronto.

Edging the steel escarpment to the south is a reconstructed liquid landscape. It is a foreshore that flows throughout the lower urban site and recalls Lake Ontario’s historical edge, a low landscape of grasses moving in the wind and flowing amongst a series of docks and bridges where people congregate, walk and enjoy the facilities of the visitor centre.

Both building and site are muted so they do not detract from the fort on the hill. Both gain presence by extent. They run horizontally, participating in both the existing lines and liquid landscapes of the fort.

Archaeological Reversals: The Oldest Site Up, the Newest Site Down
The new visitor centre is sited beneath the Common. It connects directly to the city. Inside the centre the connection from new/down to old/up is central to the visitor’s experience. After being received in the lobby, visiting the orientation room and the changing features gallery, visitors begin to ascend. A sequence of ramps and displays link the centre below to the Common above. A changing features exhibit and ramped displays begin the ascent to the ‘Time Tunnel’. In this long, tube-like space, projected images on the walls, floor and ceiling surround visitors with simulated experiences of fort life, both past and present. As the time tunnel rises, it reaches the level of Garrison Common where the Common’s archeological site is presented.

Above, the city is partially edited out, flatness recalls purpose, structures reorient to allow for ghosts, re-enactments of a past reality; evidence of time and history is presented. Daily life goes on up here but there is something else present as well.

Below, engagement with the city is lively. Events happen. Kids hang out. Lunch is served. 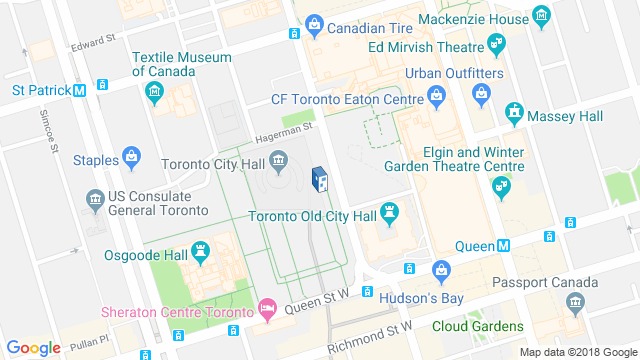