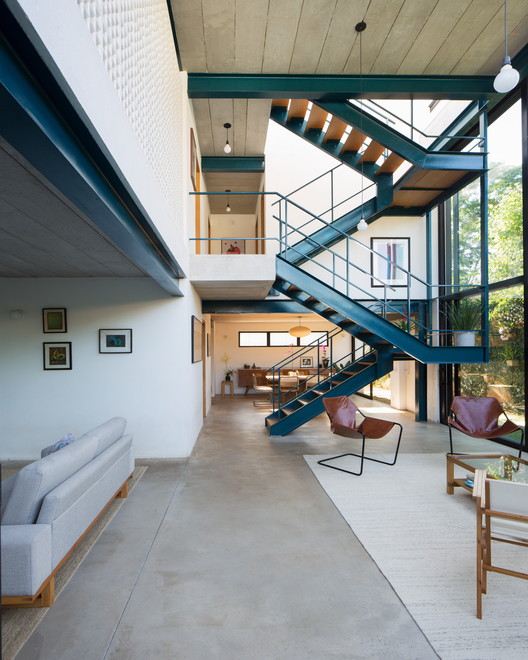 Text description provided by the architects. Commissioned by a young couple and situated on a flat lot in São Paulo’s west side, the Blue House has generous and integrated spaces. The adoption of steel frame structure and precast slabs resulted in an increase of both efficiency and agility during construction. Columns and beams were used as part of the architectural concept as they show and hide in unusual ways. Sometimes they are hidden within the walls, as part of it, sometimes they are exposed, but set in an inner layer, behind windows and perimeter walls, permanently protected from the elements.

The program emphasized the common areas. Dining and TV rooms and the double-ceiling height living area are all interconnected, facing the external L-shaped garden that surrounds the house. These rooms have also huge glass windows that allows for natural light and ventilation throughout the year. The service area is located at the front portion of the lot.

The central stairs, hanging from the upper structure, is a striking visual element and acts also as the main level organizer: it gives access to both the private areas at the upper floor and the solarium on the roof. The office at ground floor level, without a view to the outside, is connected to its own interior garden which provides natural light and ventilation to the powder room, kitchen and main suite’s bathroom as well.