Grimshaw can claim their horticultural Eden Project in Devon, South West England as being among their most iconic works. Nestled in a disused quarry, simultaneously acting as an embedded landscape feature and an alien spacecraft holding precious specimens and plants, the scheme has been celebrated as a successful modern interpretation of Buckminster Fuller’s geodesic dome concept.

Having been speculated upon both in Qingdao, China, and loosely on the Planet Mars, the Architects Journal reports that Grimshaw has begun work on a new £100 million Eden Centre in Morecambe, on England’s north-west coast.

The AJ reports that Grimshaw has undertaken early feasibility studies for an eco-tourist attraction on the site of a former entertainment center, with initial studies suggesting the scheme would be financially viable.

The scheme has received both private and public support, with Simon Bellamy, head of Eden Project International, praising the idea as re-imagining “what the 21st-century seaside resort could look like.” Meanwhile, Eileen Blamire, leader of Lancaster City Council, described the scheme as having “the potential to be a real game changer for Morecambe, for Lancashire and for the whole region, transforming the economy, raising prosperity and creating new jobs.”

Since its inception in Cornwall in 2001, the geodesic ideology behind the Eden Project has been reborn in several iterations, including a sequel Grimshaw-designed scheme in Qingdao, China, and a $140 million BIG-designed Mars Science City in the United Arab Emirates.

News via: The Architects Journal 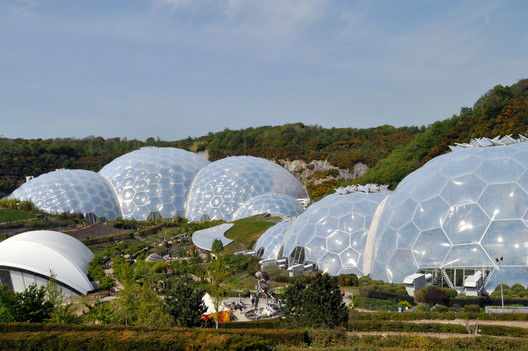