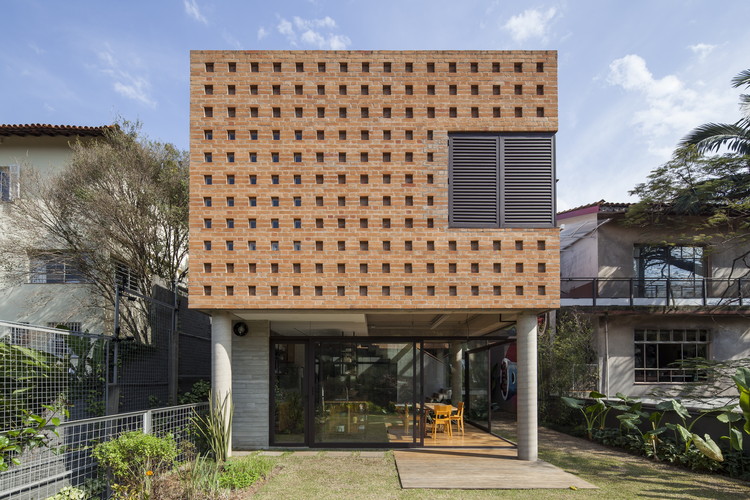 Text description provided by the architects. The house is located in an old neighbourhood where buildings are more than 40 years old.

The particular conditions of the site and the building regulations led to an atypical organization of the program, with the house facing the back of the lot and well below the level of its neighbors.

The land is 50 meters from an important avenue of São Paulo but at a higher elevation and on the opposite side there is a preserved green area. This makes that despite the central and urban situation of the lot appear to be inserted in a green area.

Thus the program's organization was reversed with the rooms on the street level and the social areas one level below. The ground floor program places the kitchen and dining room, rather than the living room, in contact with the garden. The social life of the owners often develops around food and therefore this arrangement allows everyone to gather in the same space.

Current legislation, unlike the neighboring houses that were executed at 40 years, requires that the maximum height of the construction relates to the slope of the ground. The new construction, therefore, lies far below the neighbors and special care has been taken for the sunlight to reach the lower level. For this we developed the program of the rooms in two volumes separated by a void with total transparency so that the light penetrated the house.

The initial idea was to develop a rain-screen cladding with laser-cut designs on a metal sheets creating a shading element for a glass building envelop. But the first tests showed difficulties with suppliers and we decided to develop the same concept with a traditional technique.

We created a regular pattern on ordinary clay brick, almost a texture, and worked inside this matrix to create opaque or transparent zones according to the internal program. This allowed us to reconcile the entrance of light and open visual lines without the loss of privacy.