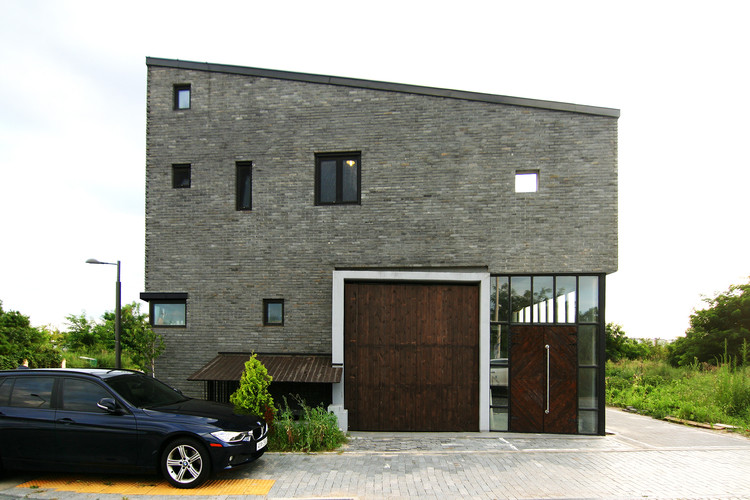 Text description provided by the architects. The house is located in a new city overlooking the Han River and was first built in a residential area. The client is a young architectural sound expert who is a young couple with a 1-year-old baby and a single man. They wanted to purchase a piece of land in the new Han River city and plan two household and a five-meter-high recording room. They had experience in interior construction and had knowledge of construction, so the issues of design could usually be discussed by e-mail or telephone.

They cared most about the communal courtyard and the large-scale studio space between the two houses for their future. The underground studio was used on a ground-wide scale, excluding legal restrictions, and a garden was planned between many visitors and parties. On the contrary, they wanted public space, garage, loft, and bike repair space for hobbies rather than residential space because of the small number of residents. Thus, the minimum residential space was considered and the design was approached from the relationship between the public sector and the external space outside.

The inner courtyard is closed from the outside by two masses and connected only by an alley to a neighbor and a pedestrian path. The ground is about one meter higher than the surrounding area and will be used as a meeting space for the two houses with grass and stone. The first floor of the two houses had rooms for guests and kitchens so they could serve in the inner yard, private spaces for privacy, and doors and windows were arranged without interference from each other.

During the design process, we considered the following four issues:
1.-  How would you protect the privacy of two intimate families on a plot?
2.-  Three of the four sides of the site face the road, which is a violation of privacy.
3.-  How is the lighting and ventilation of the two houses?
4.-  How will we approach the relationship between the residential area?

First, the way two houses were arranged up and down or side by side, was not wanted by the client. The same housing requirements were required and wanted to be composed entirely of different units due to property rights. Secondly, the exterior walls of the house were bordered by three roads, which required blocking of vision from pedestrians. This raised the height of the first floor by one meter, and placed public(or semi-) spaces such as garage, living room, kitchen while increasing the location of windows and reducing the size.

Thus, various height differences were made within the site. Some of the ceiling in the basement recording room was naturally raised one meter above the ground, allowing ventilation and partial lighting. The front and the rear housing has been designed to facilitate lighting and ventilation to different heights and locations. And the non-light areas in the back were placed in the garage, bike repair space, and warehouse.

And the most worrisome part was how the externally closed mass had the imagination of housing. The house faces inward around its courtyard, with no access to roads or sidewalks. Therefore, visitors must go through the alley to see the small yard and the two entrances. An alleyway leading to the courtyard wanted to connect with the housing complex, with the neighborhood, and to imagine many stories.  Imagine how children's voices, the smell of delicious food, the conversation between neighbors, and the soft music would change over the alley.