The Hungarian government is introducing a new skyscraper ban in the hopes of preserving the Budapest skyline. Gergely Gulyás, minister of the prime minister's office, recently stated that the ban will affect all new buildings in Budapest over 90 meters tall. The ban will not limit projects already approved with planning permission, including Foster + Partners' MOL Campus Tower, a high-rise being built as part of the new headquarters for the MOL Group. The 120 meter tower will be exempt because it has already won planning permission.

Gulyás announced that the government is intending to tighten control on the development of tall buildings, and the ban serves  as the first step in this plan. He added that, according to the relevant regulations, buildings up to a height of 65 meters will not come under restriction, while buildings between 65 and 90 meters will be subject to a complex licensing process which will also take aesthetic criteria into consideration. After the entry into force of the legislation, there will be no scope for the construction of skyscrapers taller than 90 meters.

MOL Group is a global oil and gas company based in Hungary. Foster+Partners unveiled plans in 2017 to build the campus and skyscraper in the south of Budapest, where it would become the city's tallest building. When complete, the tower will be more than 30 meters taller than the city's current tallest building, the 88-meter-tall Semmelweiss Medical University tower. Consolidating the company’s Budapest operations in a single location, the MOL Campus seeks to preserve live-work relationships as part of the urban experience.

Nigel Dancey, Head of Studio, Foster + Partners, stated that, "As we see the nature of the workplace changing to a more collaborative vision, we have combined two buildings – a tower and a podium – into a singular form, bound by nature. As the tower and the podium start to become one element, there is a sense of connectivity throughout the office spaces, with garden spaces linking each of the floors together."

Construction of the MOL Campus is scheduled to be complete by 2021. 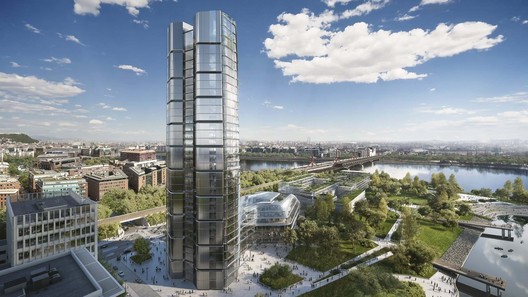