The experimental design group Space Saloon has completed their first workshop, LANDING, to create exploratory projects and installations that rethink design-build and hands-on education. Curated by Danny Wills and Gian Maria Socci, the mobile educational camp investigates perceptions of place to develop projects that make territories and environments legible. Studying material, cultural, and energy-based phenomena, students from the Southern California Institute of Architecture (SCI-Arc) and the International Program in Design and Architecture at Chulalongkorn University in Bangkok (INDA) came together in the high desert of Morongo Valley, California. 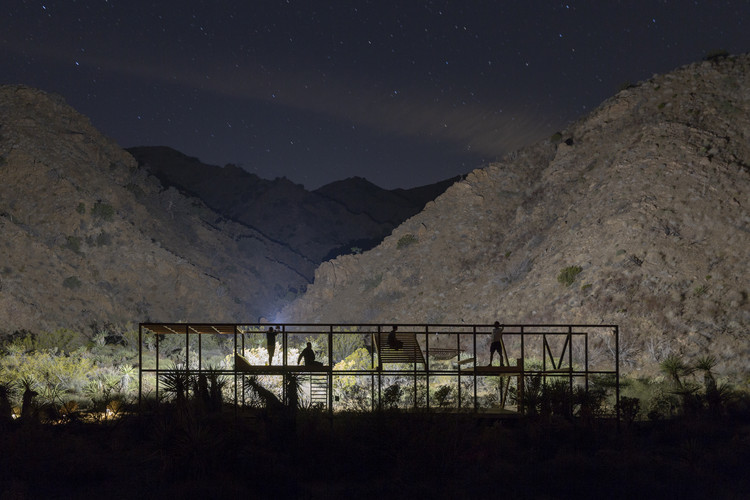 LANDING invited a group of international architects, artists, and engineers to work with university students in designing and building projects that revealed, harnessed, and amplified the elemental potentials of site. From artist-led installations to constructed base stations, the designs investigated landscape and the ephemeral aspects of place. With lectures, tutorials, and performative field-recordings, participants worked with a combination of analog and digital surveying methods, including environmental sensing technologies, hands-on building tools, and collaborative virtual design devices. Over the course of the program, students worked with a range of professionals—from instructors and architects to filmmakers, photographers, and architectural technologists—to analyze, design, build, capture, and process their collected data and work.

As a design laboratory with the goal of crafting a collaborative hands-on experience, the LANDING inaugural camp pushed the boundaries of traditional site analysis. Phase 1 was held on site in the high desert. A series of field expeditions and hikes took place in groups of 6 students. These performative measuring exercises, each led by an invited architect or artist, ranged in theme by element (Earth, Sun, Water, Wind, Space). Using the various environmental data tools, the workshops focused on the collective discovery of potential sites and projects of interest. During this phase, the workshop leaders also gave lectures focused on their work and ideas.

Phase 2 reshuffled groups into two main project teams. For this week long phase, teams designed and built projects which aimed to alter their surrounding environments based on a series of programmatic requirements: shelter, comfort, entertainment. Projects ranged from formal explorations to ephemeral installations which register the invisible qualities of site. Students acquired a wide range of knowledge in building tools and construction processes. At the end of the week there was a public presentation, lecture, and concert as a conclusion to the building phase.

The third phase focused on the documentation of the finished projects and sites. A series of workshops were held with filmmakers, photographers, and architectural technologists using the devices learned and refined over the first two weeks. LIDAR scanners, drones, and other sensing devices built a large collection of data sets for the students to use. A series of short tutorials taught students different software platforms for processing their collected data. Sites were reconstructed using photogrammetry, of which short video walkthroughs of the digital models were created, exploring the various layers of collected and projected data.

As an endeavor to produce knowledge, LANDING centered on how architects deal with site analysis. Recognizing that designers are often removed from the places they are designing for, the camp uncovered diverse forms of analysis and processes of investigating place. The following are three of the projects at LANDING that explored both spatial and material ideas of landscape and observation.

Extent is an installation that explores the spatial and visual limits of its environment. This hyper-programmed structure sits in the subtle landscape of Morongo Valley, California, gently landing among a field of sharp and prickly high-desert cacti. Suspended between two parallel walls, each measuring 60 feet long and 12 feet tall, are a series of platforms enabling activities of rest, viewing, and play. Extent performs as an instrument that is in constant dialogue with its context, reciprocally imprinting on and projecting to the site. The gridded bays capture, orient, and frame space in and around the surrounding canyon in an attempt to provide an exploratory base for future expeditions.

The Oscilloscape is both a tool for observing and reacting to the world around us. Part observation deck, part resting space, part entertainment stage, this mobile structure acts as a place for measuring, describing, analyzing, and creating various wave activities. The front of the structure—used throughout the day as a meeting space, stage, and bar—produces messages and sounds to be projected and amplified through the conic volume in the rear. Oscilloscape is a modern take on the mobile wagons of the Wild West. Its ability to reconfigure its use and location makes it an ideal station for analyzing new environments and reacting to constant changes in the landscape.

Ghost House is an experiment in material manipulation. Its form, created by suspending two glue-soaked canvas sheets over a matching pair of cubic structures, is directly dependent on the environment. The project site was chosen by studying wind patterns at various hyper-specific locations within Southern California’s high-desert. Over the course of a few hours, after its initial installation, the canvas froze into position, capturing a three dimensional snapshot of a specific moment in time. Its outline and punctured apertures create the formal memory of a house. However, once inside, all references fade away as the landscape beyond is quietly framed through the crisp portals. It is an improbable structure; the representation of the past existing in the present--neither here nor there; the ghost of a house.

Space Saloon aims to continue exploring new formats for education. Teaching, studying and building at the same time, they imagine themselves as both a school and mobile platform. Currently processing collected data and creating digital landscapes and virtual narrative vignettes to transmit their findings to a larger public, they will be iteratively applying the knowledge gained from LANDING to future expeditions and design camps.