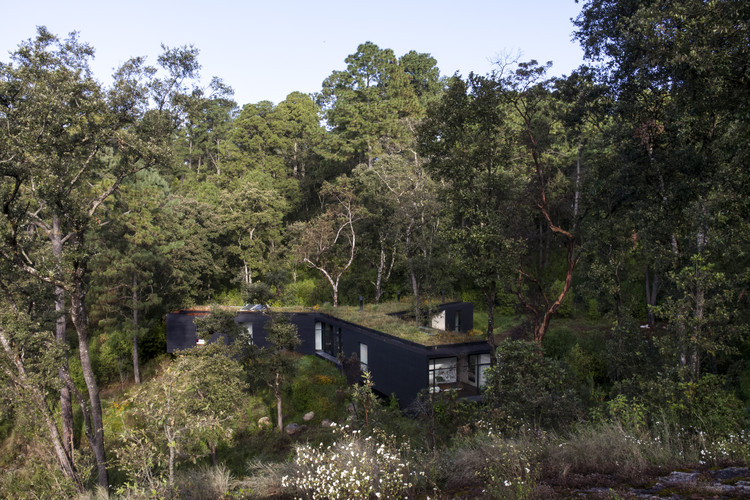 Text description provided by the architects. The landscape surrounding the house is a unique place, where each and every one of its corners can be celebrated. The project works with a double strategy: to build lookouts towards three specific points distant from each other while building a central, nodal, protected but open to the outside, and that has a total exposure to different environments that the own architecture delimits. The architectural strategy is also developed through the materiality of the project: on the one hand with decisions that have to do with maintenance, structure and thermal behavior; and on the other, by material decisions that result from considering the visual weight that architecture must have in landscapes as recondite as the one the house occupies.

Concrete will undoubtedly be a starting point, due to its high structural performance against a changing topography on one side of the house; It is also indisputable its good behavior over the years and its low need for maintenance. The thermal mass of the material is positive due to the thermal jumps in the area; and the incorporation of large openings of crossed windows allow to generate punctually crossed ventilations that grant the project a high thermal comfort throughout the different moments of the day, as well as throughout the year.

However, the differential ingredient of the CDLR project is the commitment to the reuse of the huge amount of wood obtained from fallen or dead trees throughout the area, the roof of the house, which defines the limits of all living spaces, both interior and exterior, will be built with that wood, and that wood. Between these beams, a ceramic piece is placed as a lost formwork, which consolidates the plane of the roof.

A material of great personality appears in this way, which constructs a single plane, with the wood establishing a very emphatic and directional rhythm that will order the project, at the same time that it defines a basic work module for the definition of the spaces. The house is painted black. It is painted (and not dye), as it is, in turn, another layer of material protection that configures the house; it is painting, because the house is very exposed to the inclemency of time, and the dye tends to lose its qualities over the years; and it is black, responding to the desire to blend in with the landscape, seeking a certain anonymity in front of the vegetation and exuberant views.