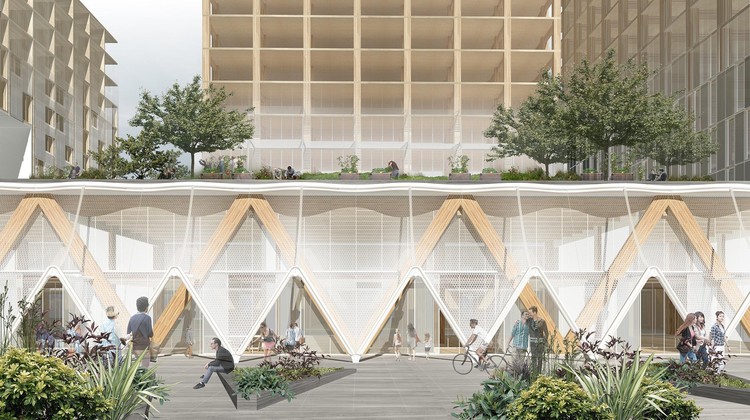 Located east of the city's downtown area on the edge of Lake Ontario, the Quayside project would be the first neighborhood in Sidewalk Lab's major redevelopment. The unused 12-acres at Parliament Slip would become a testing ground for the larger 800 acre site. As an entirely timber neighborhood, Quayside would be built from local and renewable Canadian timber. "Sidewalk Toronto is considering using tall timber technologies on an unprecedented scale, and exploring what it would mean to build Quayside primarily, or even entirely, out of tall timber," said the team in their design proposal. Two types of engineered wood would be used, including cross-laminated timber (CLT) and glue-laminated timber.

Combining offices, shops and residences, Quayside would include a mix of programs. The project is illustrated with visuals showing high-rise wooden structures created with perforated screens and repeating triangular frames. Structures would be built from modular kit of parts that could be adapted throughout the neighborhood. Building connections to Lake Ontario, the project would include parks, plazas and cafes oriented to the water. The proposal even suggests amenities like boating, sports courts and floating cinema screens. The neighborhood aims to have ground level community spaces like grocery stores, playgrounds and libraries.

"We've dedicated the bottom floors of our buildings to a porous, flexible program we call Stoa that is accessible to everyone," said the team. The Stoa would function as year-round spaces wrapped in transparent and movable facades. The idea of designing for the seasons extends to a proposal for modular pre-cast concrete slabs that are heated to melt snow in Toronto's cold winters. Pedestrian routes are emphasized with sidewalk designs and five different concepts for changing street layouts.

Quayside plans are currently being reviewed by the public for further feedback. As the project continues to develop, Sidewalk Labs aims to achieve precedent-setting levels of sustainability, affordability, mobility, and economic opportunity.