Save
The Deadly Genoa Bridge Collapse was Predicted, and Avoidable
Share
Or
Copy

39 people are now reported to have died following the collapse of the Morandi motorway bridge in Genoa, Italy. The incident happened on Tuesday 14th August, when one of the bridge’s structural components, comprising of pre-stressed concrete stays and trestles, collapsed onto a railway line and warehouse 150 feet (45 meters) below.

The cause of the collapse is not yet known, however, attention is now turning to the bridge’s maintenance record, concerns of its integrity stretching back decades, and how the collapse sits within the broader context of aging Italian infrastructure.

Over the last decade, the 1967 Morandi Bridge has been under constant maintenance, with a 2011 report by the Italian highways operator Autostade per l’Italia warning of the structure’s “intense decay.” Local residents have long observed maintenance work on the bridge on a nightly basis, with one telling The New York Times that on the night before the collapse, workers were focused on the portion of the bridge that ultimately collapsed.

The continuous maintenance on the bridge fueled speculation and debate over the bridge’s sustainability and fears of its collapse. Antonio Brencich, professor of engineering at the University of Genoa, said in a 2016 interview with an Italian broadcaster that “the Morandi Bridge is a failure of engineering” due to the frequent repairs needed.

The bridge was constructed of pre-stressed, reinforced concrete as opposed to the standard steel design for modern bridges, with Professor Brencich attributing the concrete’s rapid deterioration to the major repairs and replacements needed from the 1990s onwards. As the tie beams linking bridge parts were encased in concrete, a precise analysis of their condition was also never possible, according to Brencich.

It was his view that the cost of maintaining the bridge had overtaken the cost of demolition and rebuilding. This was echoed by Giovanni Calvini, leader of Genoa’s business federation, who said in 2012 that the bridge was at risk of collapse within 10 years, and needed to be replaced.

The bridge’s collapse has also sparked a wider conversation about the condition of Italy’s infrastructure. As the BBC and Corriere Della Sera state, the Morandi Bridge is the fifth bridge to collapse in Italy in the last five years. In response, Italy’s transport minister has ordered a comprehensive safety review of the country’s postwar infrastructure, which is showing signs of age.

In an interview with The New York Times, Director of the Institute for Construction Technology Antonio Occhuizzi warned that as much Italy’s infrastructure nears its useful lifespan, it “needs to be carefully re-examined […] in some cases it can be reinforced, in other cases it will have to be demolished and rebuild completely.”

Our position, typically, is to try and conserve rather than demolish and rebuild, as happens in other countries […] The collapse of the Genoese bridge was a serious alarm because it is not an isolated case — in the last three years, a number of bridges have collapsed in Italy, and they are all around 50 years old.
-Antonio Occhiuzzi, Director of the Institute for Construction Technology

Giving his reaction to the incident, Italian architect Renzo Piano shares the outrage, saying in an interview to La Repubblica that "bridges do not collapse by accident, let nobody say that this was an accident [...] In Italy we manufacture sophisticated equipment [for site analysis] which we export to the entire world. But we don’t use these tools on our own constructions. Why? Only with a diagnostic approach will we…have scientific certainty."

While much evidence exists that this disaster was imminent, a definitive cause of the incident and the burden of responsibility will likely take some time to evaluate. In the meantime, Italy’s deputy transport minister has stated that the entire bridge will be demolished. 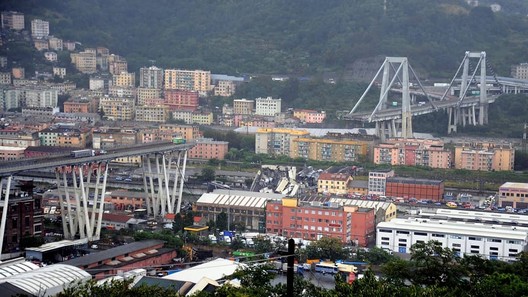