Dubai Municipality has announced that the city is planning to preserve its landmark buildings from the 1960s and 70s as part of a new initiative called Modern Heritage. Jointly launched by the Planning Department and the Architectural Heritage Department, the initiative aims to save the first footprints of Dubai. The initiative would protect some of the most significant buildings constructed when the city was first beginning its rapid development. The plan includes the preservation of the Dubai Trade Centre, a 149-metre-high tower regarded as the city's first skyscraper.

Designed by John R Harris & Partners in 1973, the Dubai Trade Centre is a landmark building that aimed to balance modernity with local architecture. Inaugurated by Queen Elizabeth in 1979, the 39-story office tower was the tallest building in the Arab world until the completion of the Burj Al Arab 20 years later. The Modern Heritage Initiative aims to preserve the tower as part of the city's cultural heritage. Featuring on the back of Dh100 banknotes, the tower still stands as an iconic structure along Sheikh Zayed Road.

Over 150 skyscrapers now stand in city, including the world's tallest building, the Burj Khalifa. Other buildings in the listing include the Clock Tower, Al Khuloud Nursery, Al Ras Library and Al Baraha Hospital. These include the first public library in the country, as well as one of the first hospital's in the city's central Deira area. The Dubai Municipality is collaborating with a group of partners on the initiative to preserve the Trade Centre, including the Knowledge Fund Establishment, Ministry of Health and Prevention and the Dubai Culture and Arts Authority. The initiative recognizes the local history of urbanization, a past that began with the Trade Centre as a symbol of Dubai's development into a global city. 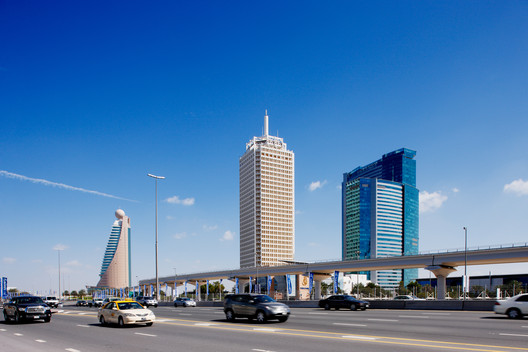