✕
Save
Who Cares About Restoring Heritage in Mérida, Mexico?
Share
Or
Copy 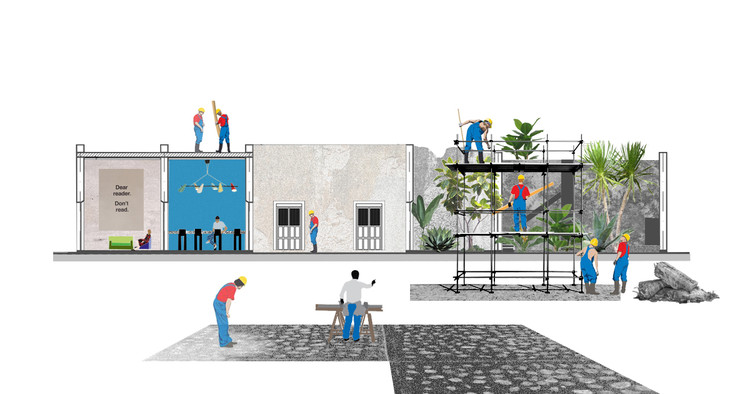 In his book The Right to the City (1968), Henri Lefebvre talks about ending the creation of spaces managed by the logic of profit, to launch a plan of "self-managed territory" that does not leave aside the "historical heritage," nor allow the decomposition of space, but instead works for the restitution of urban centers as places of creation.

Globalization has produced cities without limits whose focus has been on the immediate benefit, directly attacking the preservation of cultural heritage, among other things.

Caring for heritage and bringing it closer to the citizens not only contributes to the construction of a local identity, but also influences constructive and material innovation, as well as improves the quality of life of nearby inhabitants through respect and understanding of past cultures by generating diverse and unique cities.

Mexico is one of the pioneers within the Latin American countries in heritage the preservation. It has been 79 years since the creation of the National Institute of Anthropology and History (INAH), an institution responsible for identifying and ensuring the preservation of the Mexico's cultural heritage. Despite the incredible advances, the decision to work constructively and intervene architecturally, is still quite personal and based on the self-management of the architects.

Below we highlight the work of the designer Nauzet Rodriguez (2nd Place in our first edition of the Refurbishment in Architecture Awards) and his work in heritage preservation in Mérida, Yucatan, Mexico with a contemporary program.

AD: How do you manage this type of project? Are they born from state protection or are they local interventions that arise from users?

NR: The project comes from our own initiative, born and developed by us. The recovery of heritage buildings in the city of Mérida is being carried out mainly thanks to particular initiatives. There are aid programs that rescue facades, but the bulk of the actions fall on the owners. The INAH is the competent body that applies the criteria of recovery and conservation on the property. They are also the ones who determine the suitability of each intervention and its adaptation to new uses or current housing needs.

AD: How do you get people interested in the rescue of real estate?

NZ: I trained as an Industrial Designer and I studied postgraduate specializations in museography and exhibition design. That's where my interest in heritage comes from. The city of Mérida has a great colonial architectural heritage that captivates all its visitors. The possibility of recovering this space that made us fall in love from the first moment arose and we did not hesitate to embark on the project.

In more general terms, recovering/remodeling /rehabilitating are operations with which I deeply connect through design principles. There are infinite spaces in abandonment that must be recovered and in this way try not to expand our footprint beyond the existing limits.

Sticking to the stock is a job that as a designer, requires a very healthy containment of the ego and in turn a very valuable contribution to the drawing of our cities, recovering living space without the increase of the urban sprawl. No new construction, however good it may be, will ever equal the value of our natural environment.

AD: How do you approach the treatment of existing materials and under which criteria do you relate them to the new intervention?

NR: The existing constructions are everything at the time of recovering/remodeling/rehabilitating. They can be denied or can be accepted. Personally, I believe that the level of success of the proposal depends mainly on the degree of acceptance of the remains. On certain occasions, the correction of deficient remains supposes great improvements in the project. The materials are not unrelated to these criteria. In the case of our project, it has been the scrupulous respect of the previous construction that has finally been more valued by all those people who have commented on the matter: achieving a new use for new experiences without having disturbed in the least what already existed when we arrived. I insist, to contain the ego so as not to "design" anything, is surely the key to this project, to leave with absolute surrender that it is the house itself that gives us the guidelines to work on it. Otherwise, it would have been a failure. Let's say that the objective of the intervention was not to lose the magic that already existed.

AD: What role do you think the furniture occupies in your works? Do you work with local designers?

The furniture is essential to the project. You can not think in a vacuum because in general, nobody lives or enjoys empty spaces. Therefore, it is projected thinking about the dimensions, forms, materials and uses of the furniture. Even more in the project of a bar, where the furniture and its use is as important as the space that houses it. In our case and due to the size of the property, we decided that the furniture would not attract more attention, we wanted to use something that any visitor imagined should be there with the naturalness of the things that always existed. Let's say that we prefer to sin with sobriety than to fall out of tune. However, we do not always apply the same criteria; there are other projects where the margin to incorporate more unique furniture is greater.

Still contemporaneous with Lefebvre's ideas, heritage care in architecture continues to be self-managed and its protection demands active architects in the process. Below, you can see the complete restoration work developed by Nauzet Rodriguez.

35 Text description provided by the architects. The project for this bar has been strictly determined by the nature of the building itself and its cataloging as a Historic Monument by the National Institute of Anthropology and History of Mexico.