London-based JAA studio has released a new proposal to transform Grenfell Tower into a black concrete memorial to victims of the fire. Encasing the burnt-out shell, a solemn sarcophagus of 224 concrete panels would wrap the facade to anchor the tragedy in collective memory. Titled Grenfell Tower: in Memoriam, the concept does not claim to be an answer but an alternative way of thing about the site and its new-found sanctity after disaster. As JAA states, "the city needs its scars." 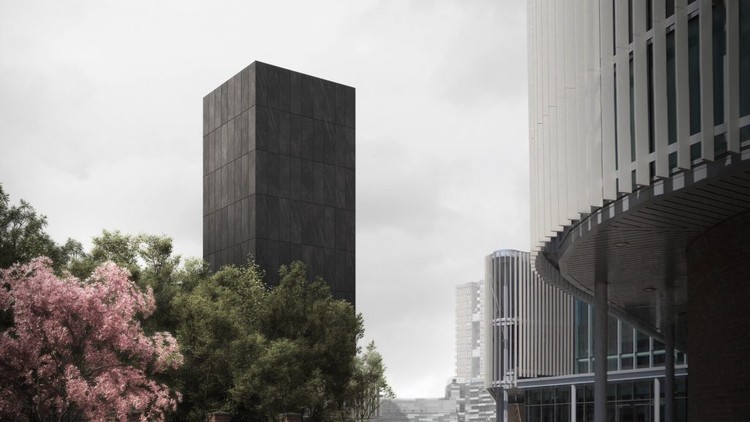 Last year, the Grenfell fire engulfed the 24-story west London tower and resulted in the death of 72 people. The fire began in the kitchen of a fourth-floor flat and spread to the exterior, where flammable cladding, failed fire doors, and uPVC window frames allowed the fire to spread up the building and into higher floors. Expert witnesses testified that a number of these elements that were added in 2016 refurbishment accelerated the spread of the fire. In addition, a mechanical ventilation system broke eight days before the fire, and smoke became trapped in the escape routes of lobbies and stairwells.

JAA believes building over individual spaces borne out of tragedy leads to a loss of awareness over time. "We cannot afford to forget – the city needs its scars, and it learns from them, just as a child does" states JAA. In their proposal, Grenfell would remain in the city's collective consciousness as a physical element of the skyline. The studio wants to ask questions about what the government, city and construction industry chooses to remember. The proposal would leave the tower standing and set apart, sealed inside a black sarcophagus. The concept would leave the roof of the tower and perimeter accessible, with a memorial wildflower garden at its base. Repurposing the first four floors, the design also suggests an glazed extension that would replace the site's previous boxing gym and community center. At night, a beacon in flat 16 would light up to mark the origin of the fatal fire.

No longer deemed a crime scene, the tower is expected to be demolished. Now under the control of the local council of the Royal Borough of Kensington and Chelsea, residents continue to await the fate of the tower. In March, a team of architects and designers including Adjaye Associates, Cullinan Studio, Levitt Bernstein, Maccreanor Lavington, Murray John Architects and Penoyre & Prasad were chosen to work with the local community for the housing estate’s refurbishment in the hopes of producing “resident-led” ideas for the area. As part of the process, the Lancaster West Residents’ Association has published a website outlining the aims and obligations for the design agenda. Work is expected to begin on-site in the summer of 2019, though no architects have yet been selected.