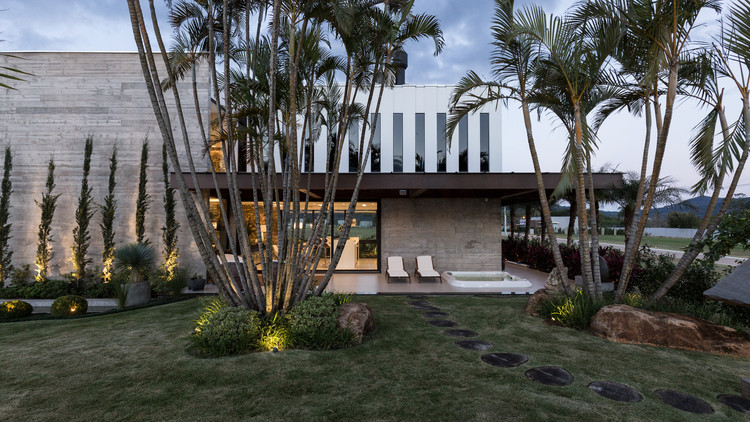 Text description provided by the architects. Located in the only closed condominium in the city, the residence is implanted in a land of 12m x 27.5m. The site plan occurred through two overlapping rectangular prisms, which also compartmentalize the house requirements program in two zones: the social and the privative.

On the ground level, the ornamental lake demarcates the main access, which directs the user to the living room with double ceiling height. The amplitude of the environment is also reflected by the horizontal continuity and integration of the living room, kitchen and dining room with the side balcony, in which the spa and a pergola made of wood and glass were positioned. The service's core (laundry and toilet) is behind the kitchen.

On the upper level, the couple's suite is separated from the children's suites by a corridor that crosses through the living room’s double height ceiling. The main suite faces the front of the lot, with a volume in balance, whose projection forms the shelter of a vehicle, and the other suites were positioned in the later range of the volume. The circulation on this floor is illuminated by a series of vertical openings that create a play of light and shadow in the internal space and an interesting rhythm on the facade of the house.

The materiality of the house results from the contrast between the two floors. The ground floor is an apparent concrete box on which rests the pure volume of the dorms, whose neutrality and lightness is represented by the white color. The tension between the materiality of the volumes is also perceived inside the residence. The combination of these elements with wood, stones, water, and vegetation also maximizes the formal result of this cozy and permeable residence. 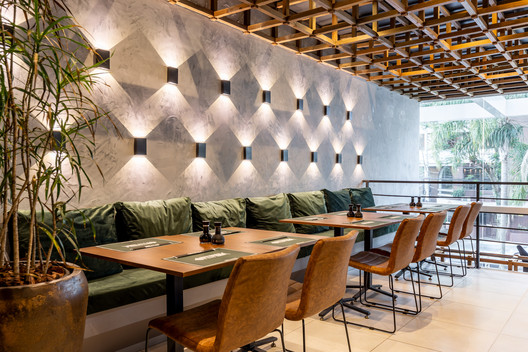