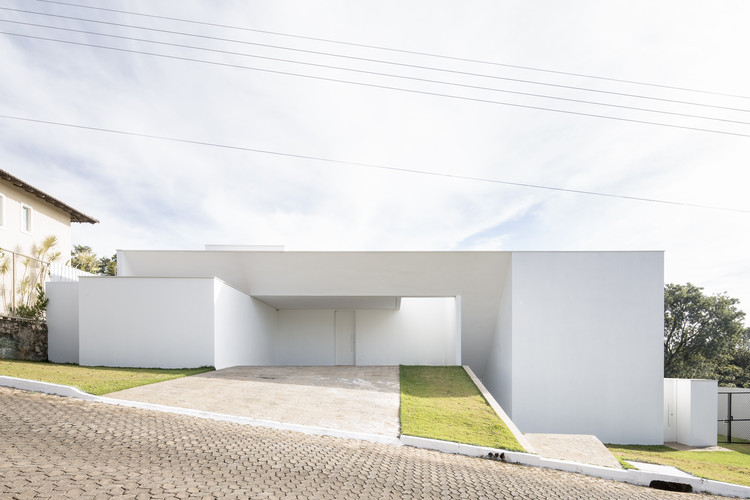 Text description provided by the architects. The steep slope towards the back of the lot between its two sides has directed the decision to place the program in two different internal levels. One of them is aligned with the highest point of the topography and the other is aligned with the lowest point of the topography inside the projection of the construction. The house aims to function as a device to exacerbate the perception of its context – the modified topography, the conditions of the local natural light – creating a “promenade architecturale”  that could reveal specific views towards its immediate surroundings.

The maximum height on the main volume´s perimeter is fixed while different inclinations of the roof were manipulated followings the desired heights of the internal ceiling heights. The ramp of the main access follows the approximate inclination of the existing topography under a roof that “compresses” the internal ceiling heights towards the center of the house, expanding it up again towards the existing woodland in the backyard. The same inclination that results from this operation is reflected in the forms of the eaves of the roof in the upper floor.

The views to the external area are interspersed by big opaque walls that protect the interiors from the excessive insolation. Two specific views to the outside were framed, one on the top of the stairs (a view to the valley in the distance) and a high window on the corner of the living room (a view to a nearby treetop). The natural light that enters through a linear skylight marks the highest ceiling height inside the house.

There are no windows in the front facade, except for the three white doors that vary in size according to their function: direct access to the bedrooms, the service access, and the main access. The house gives up part of its lot to the street, there´s no fences or walls. The solidity of the front facade is opposed to back facade, marked by big transparent openings and by the apparent fragility of the steel structure of the verandas.