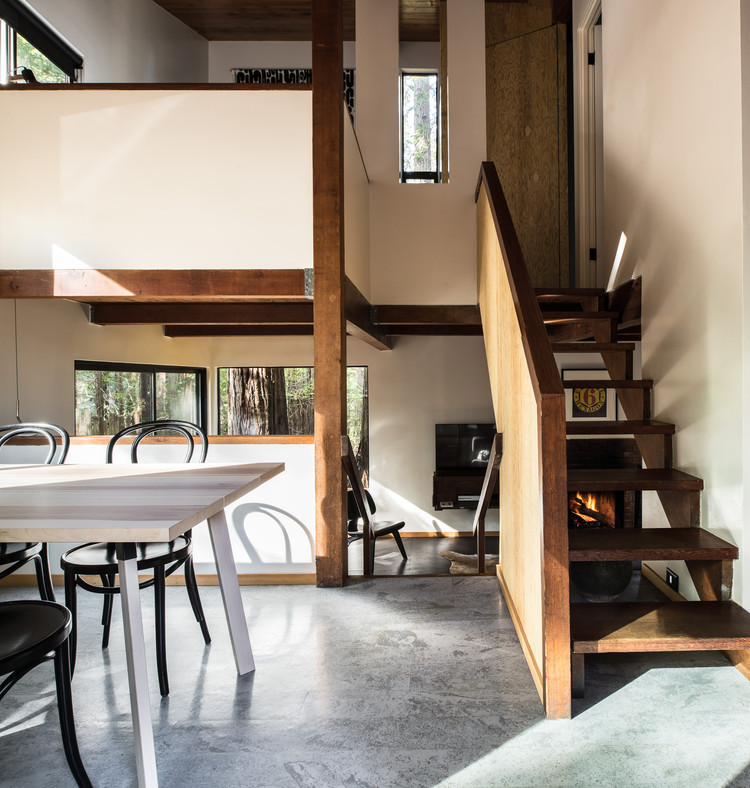 Text description provided by the architects. Sited in lush redwoods forest of The Sea Ranch, this cabin is one of a series of Demonstration Homes commissioned by the original developer, Oceanic. Designed by San Francisco Bay Area architect Joseph Esherick in 1968, the 684-square-foot home was intended to exemplify how the Sea Ranch design guidelines could be used to build a well-designed, low-cost weekend cabin. The cabin’s 20’ x 20’ footprint consists of three levels, which open onto one another forming a loft-like space. Because of their elemental layout and small size, few of these homes remain in their original state.

Framestudio’s team recognized the cabin’s historic importance and sought to balance preserving the historic fabric while making alterations and updates to meet the practical needs of the new owners. A fully functional kitchen, the capacity to sleep six, and securable storage areas were among the priorities. Framestudio developed a scheme which restored many of the original details, hallmarks of Esherick’s design, using wood which had been reclaimed from alterations not original to the design. New interventions were conceived to contrast in color from the historical framework of the home but constructed from materials suitable for the age of the home.

In the kitchen, the lower cabinets were replaced with a more functional design fabricated from baltic birch plywood clad in an ultra-matte black laminate. Appliances, including a dishwasher, were incorporated along with extra storage drawers in the toe kicks. The original upper cabinets were restored, and the exhaust system was rebuilt to the original design using an exhaust fan from the era. The two adjoining bedrooms on the upper level were intentionally spare in their design. The original closets were only alcoves that contained a shelf and bar for hanging clothes.  Framestudio designed fitted blue laminate cupboards for these alcoves, which include a secured storage, as well as areas for clothing, linens, and cleaning supplies.

The open plan nature of the home was preserved, specifically on the bedroom level, which lacked doors in the original design. Framestudio designed a full-height partition that provides privacy between the two rooms. When not in use, it folds into the wall, seamlessly disappearing into the rough sawn douglas fir paneling. The bunk beds in the second bedroom cantilever off the side of the main volume, adding a sense of playfulness to the simple geometry of the design. In the living room, Framestudio designed a built-in sofa, which houses additional storage and a pullout queen sized bed, bringing the sleeping capacity of the home to six. 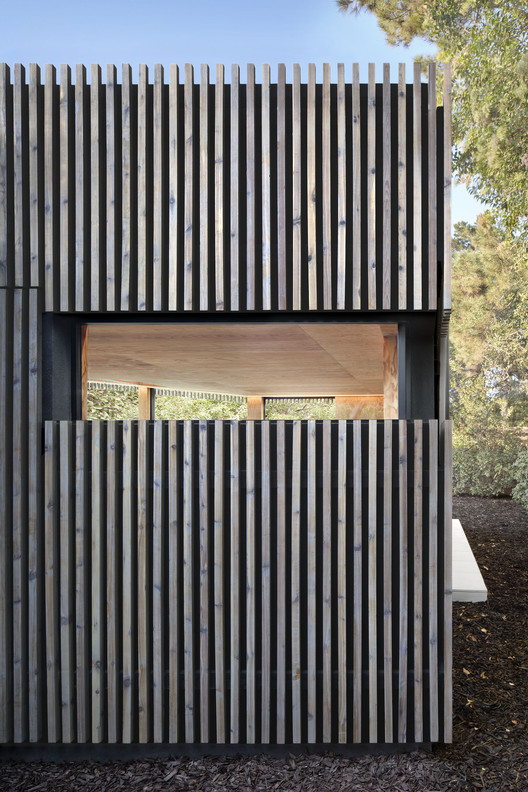