Save
Institute for Integrated Learning in Management / Morphogenesis 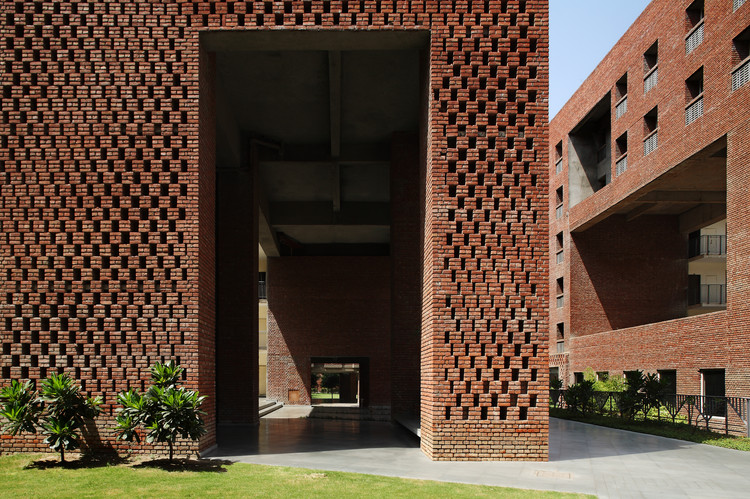 Text description provided by the architects. The project is a student-housing complex within the existing educational campus of the Institute for Integrated Learning in Management, Greater Noida, India. The campus takes inspiration from the urban structure of court, cluster and street living of Shahjahanabad, the old settlement of Delhi. The aim was to create an architecture that would be a socio-cultural setting for fostering cross pollination of ideologies in young minds.

The notion of the street being an urban space and the community being the caretaker of it has been used to align all movement along one narrow street with the individual blocks facing into this primary circulation spine. Within each block, courtyards are introduced as internal communal spaces. A series of interaction spaces in the form of voids spiral up the form, creating in a way, a vertical urbanscape that overlooks the central spine and the courts. This plays a vital role in Morphogenesis’ design approach for this student habitat in terms of safety and security, both perceived and real. The street court configuration whilst traditionally inspired, is also an outcome of adapting Jane Jacobs’ concept of ‘eyes on the street’. Jacobs had famously explained this theory stating, "There must be eyes upon the street, eyes belonging to those we might call the natural proprietors of the street".

An apartment format is adopted for the student accommodation to promote community living. These apartment units are placed along the external periphery for maximum daylight and all internal circulation is within a corridor system that overlooks the central courtyard of each building. Occupants give each court a unique character throughout the year by using it as a celebration space, activity space or breakout space. The porosity of jaalis is used to cross ventilate these courtyards whilst the movement of the sun adds the dynamic dimension of light and shadow patterns sweeping the form through the day.

The spatial configuration leading to the courtyard morphology is carefully analyzed to create maximum shading and generate a microclimate, thereby extending the outdoor usage periods. This helps in reducing built up area demand. Daylight analysis helped articulate the façade whilst ensuring optimal light penetration. Indoor gathering spaces have been located below ground and open to large earth-banked subterranean courtyards. The subterranean landscape areas are articulated with water features and seating spaces to enhance student use.

The choice of brick as the primary façade material was also an exercise in resource optimizations by serving the dual purpose of creating a high performance and low maintenance facade that weathers well in this harsh climate. Historically, the region is replete with examples of traditional brick construction, and brick is also identified with educational institutes.

The IILM student housing is a project where the architecture and spatial character of the built form plays a key role in developing the socio-cultural ethos of this student community. It is also a case where optimizing resource through material and morphology allows for reduced built form without reducing functionality. 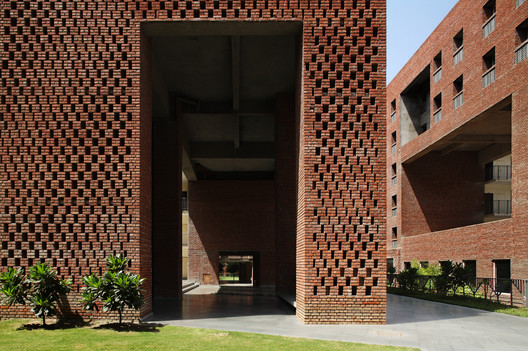