“UTERE FELIX DOMUM TUAM”  (Happily live your house)
With this phrase tattooed in one of its concrete walls, we print our wishes for the future owner of the house, as a matter of fact all our house plans for a while now have that phrase in them, reminding us that is the most important goal in this type of building. From this phrase as well, the official name of Domus Tuam House was taken, “Your House”.

Emplaced in the south suburbs of Guadalajara, near a large commercial complex, in a small, quiet condominium surrounded by trees called “La Fresna”, the house is composed by 312 sq. m. divided in two stories. Its a house meant to be sold, so we planned it in a way that its finishes and dimensions were commercial and profitable according to the financial analysis, but without forgetting the high standard architectural detail and quality that our firm requires.

We didn’t leave aside what has been an additional diverting character in Lassala + Orozco architects’ projects; that is involving a theme or element that regulates our design process. In this particular project this theme was not a book or story as we have used in the past but a painting by Josef Albers titled “Bent Dark Gray”.

This artwork by Albers in gray scales gave us the perfect color palette for the house and indirectly influenced its interior design, decoration and furniture. It is well known that Albers based a part of his work in ancient mesoamerican architecture, its forms, weights and proportions. This also inspired some architectural elements in Domus Tuam’s composition, like the identical cubic proportions of the central patio and living room, the lattice that complements the access path to the main entrance (a small wink to Barragan too) and the walls with only a few voids that allow the house to have open inner spaces and privacy from the exterior.

In this occasion the furniture selection and decoration ran in charge of the successful interiors firm Esencial. Because of the commercial nature of the house, what we proposed was to give an option where the future client can decide whether or not to purchase the house fully o partially furnished. This permits us as architects to share with them our vision of the finished spaces with furniture and art work in a harmonious atmosphere. 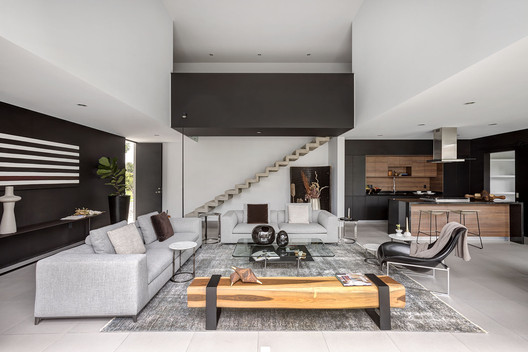