New images have emerged of the revised Foster + Partners-designed Apple Global Flagship Store at Federation Square in Melbourne after the original proposal attracted criticism and comparisons to a “Pizza Hut Pagoda.”

The revised scheme has been the result of workshops involving Fed Square Management, the Victorian Government, the City of Melbourne, and Apple, with input from Donald Bates, chair of architectural design at the University of Melbourne.

To date, the project has been on the receiving end of criticism from public officials in Melbourne, and members of the public. The decision by the Victorian government to demolish the existing Yarra Building to make way for the new Apple store was met with concerns that the diverse public site would become akin to a generic shopping mall.

The original scheme proposed by Foster + Partners was equally contentious, with concurrent petitions against the plans reported to have collectively amassed almost 100,000 signatures, and the City of Melbourne receiving 800 submissions for a motion calling for the scheme’s redesign. The approval process also received criticism for a perceived lack of public input.

Following a steering committee in February 2018, a set of guidelines was issued for the scheme’s redesign, which has culminated in the revised proposal being released. The new scheme will include a re-designed roof to accommodate shading and solar panels, with a revised geometry and form dispelling comparisons to the fast-food chain.

Meanwhile, 500 square meters of public space will strengthen the connection between Federation Square and the nearby Yarra River, with grassy space and tree-lined paths. Bookable open space will also be provided for music performances.

The Apple Federation Square store is expected to open in 2020. News of the scheme's redesign comes weeks after the Apple Store in Macau opened to the public, also designed by Foster + Partners. 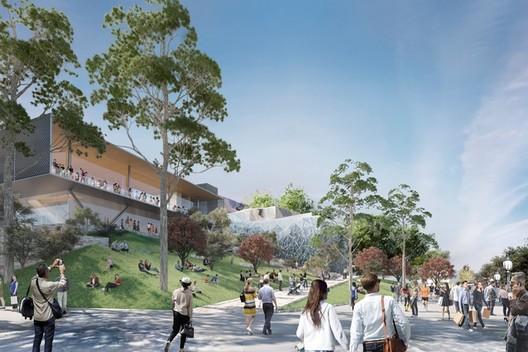