In the world of politics, the notion of “transparency” refers to the honesty constituents expect of their elected officials. In architecture, it means something much more literal: a transparent surface, like a window or glass wall, is one you can see through. In the small Dutch municipality of Albrandswaard, architects Gortemaker Algra Feenstra have melded the two definitions with a circular, glass town hall. As the firm writes of the project, “a single transparent space...shows the process of democracy as soon as you enter.”

The town of Rhoon (within the municipality of Albrandswaard) will house the town hall, which will sit at the crossroads of an eclectic collection of public spaces: a metro station, an arcaded shopping mall, a fifteenth-century castle, and the Groene Kruisweg, a major road that runs through the town below an overpass. Conceiving of the town hall as yet another public space, the architects have composed a scheme that connects the second floor of the building to the elevated overpass; “the entrance and all public amenities will be on this level,” explain the architects, leaving space on the ground level for car and bicycle parking and maintenance rooms. The two circular stories, slightly shifted relative to one other, create “a covered outdoor area with a sheltered entrance as well as permanent awning” on the opposite side.

Within the building, uses will not be restricted to municipal business. The program abandons the traditional town hall structure in favor of a style that more closely resembles the modern coworking space, with “office spaces for Stichting Welzijn Albrandswaard, the neighborhood team, flex workstations and a rooftop terrace.” By creating fluid connections to the city and reframing the role of a municipal building, the architects hope the building will be one in which “citizens and employees can identify themselves and of which they can be proud, a building in which approachability and accessibility are of the utmost importance.” 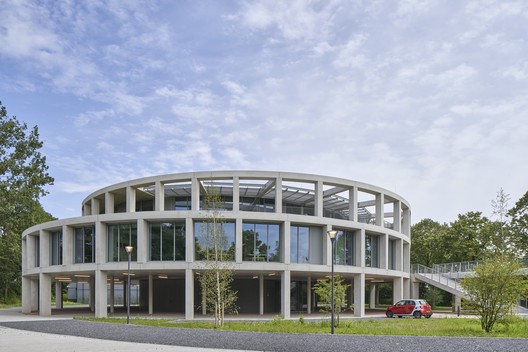