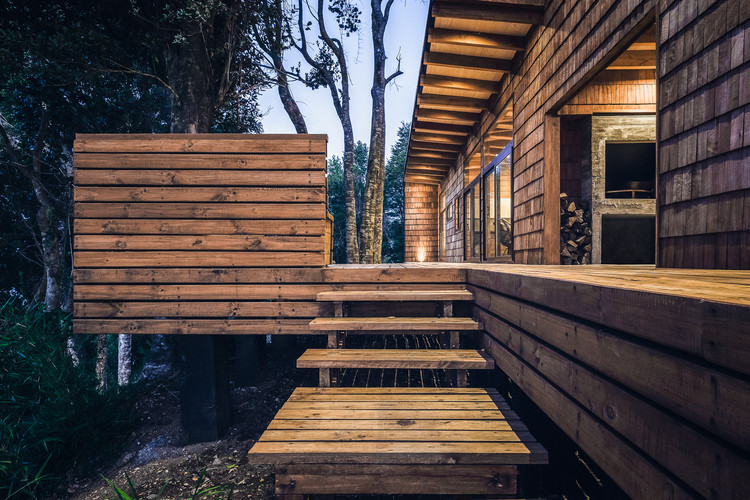 Text description provided by the architects. The project was a resting house, located on the shore of Lake Llanquihue, a few kilometers to the east from Puerto Varas, a small city in the north of Chilean Patagonia; and the imposing Osorno volcano in the background. Furthermore, the land had a slight slope and a dense forest that reaches the lake`s beach.

The main objectives of the house were; First, to be located in a clearing area that the terrain provided to integrate the forest and the lake, and second, a simple lines design, which integrates local materials giving the option of different uses according to the seasons (a summer terrace, barbecue and lake, which is complemented with a southern winter of fireplace and kitchen).

We developed a single volume with one big roof along the terrain, being raised parallel to the lake that allowed opening to this and to the north, depositing the high amount of rain from this region on the back of the house.

The program of the house was designed to accommodate a complete family of 6 during the summer months, and only the 2 owners during winter, and having full connection among the living/dining room and kitchen, the central core of the house.

For this purpose, a central axis connects this core with the two bedroom areas, the master bedroom for more privacy in one corner and in the other a two-level volume with the children bedrooms and a small barbecue. This central axis is repeated in the outside as a terrace for circulations during summer months.

The large windows of the north facade build a strong relationship between the unique landscape and the interior of the house, maximizing the sunlight.

The interior finishings were completely made in wood, achieving an atmosphere of warmth, due to native woods recovered from an old house in Osorno. Thanks to the exposed beams, you can see the total height of the volume, plus a concrete block, create a harmonic mix that culminates with a slow combustion stove inserted in the main room.

For the exterior facades, a coating of black fiber cement was proposed to give an imprint of typical barns of the region, and generate a contrast with the interior. Finally, a tejuela coating on the north facade, a typical material of the Patagonia and where the biggest interaction happens during the summer months.