Even today, Jeanneret’s legacy looms large in Chandigarh (he even requested his ashes be spread at its Lake Sukhna Lake): the city restored his residence—where he lived for nearly ten years—and recently turned it into a museum celebrating his many contributions to the city’s development, both during the construction of the Capitol Complex, and later, as its official Chief Architect.

The house not only provided a place for Jeanneret to reside but also served as an experiment of sorts, allowing him to test ideas that he would later develop for large-scale residential projects. Part of a cluster of housing for government employees, the home features staples of modern design, such as a compact, functional floor plan and plenty of open and semi-open spaces, creating a dynamic play of light and shadow throughout the building. And even with a tight budget, simple yet elegant details—including the perforated brick screens, the Yves Klein blue walls, and the geometric built-in niche frames and wall shelves—lend the house a look of sophistication. Inside, visitors can get a rare glimpse into Jeanneret’s time in India and his creative process through the many trinkets, photographs, and letters, as well as his own seldom-seen wood furniture on display. For those urbanists, a detailed presentation sheds light on the lesser-known architect’s extensive contribution to the creation of the watershed urban plan of Chandigarh. 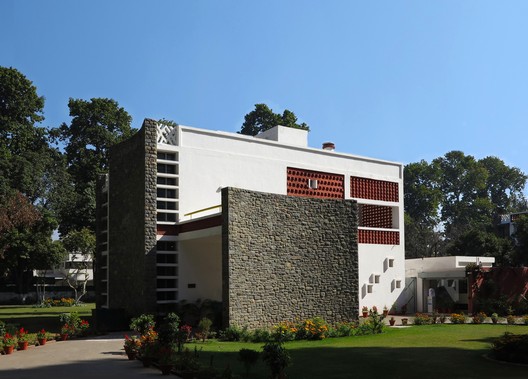