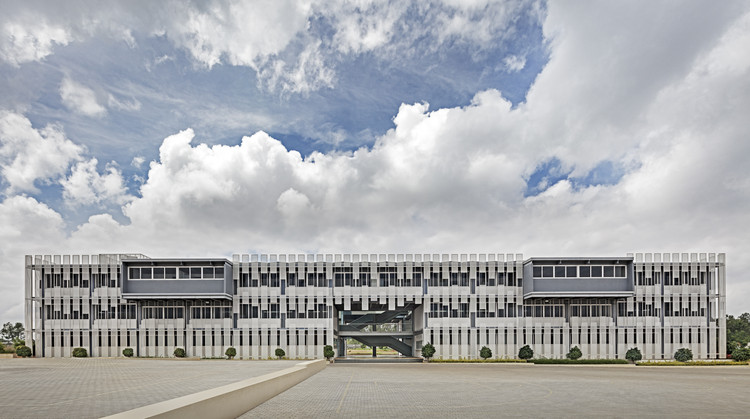 Text description provided by the architects. We were asked to design the engineering department for an upcoming university campus in suburbs of Bangalore catering to two important requirements along with the programmatic brief which were to complete the project in minimum possible time-line and to make the structure adaptable for future additions and alterations. Hence, the idea of prefabricated steel structure was proposed where all major work was done in workshop and then these prefab components were assembled at site. This helped us achieve accuracy in less time without compromising the quality.

The plan was simple and linear with classrooms on north and south overlooking the existing natural landscape around the site and service areas sandwiched in between on east and west side of the block. While classrooms are on the outer side, corridors face the internal court, which divides into two, vertical circulation being in the center with stairs and bridges. One part of the court acts a gathering space while the other acts as an informal gathering space extension from library and audiovisual room. A tree like element, termed as the knowledge tree, in the center acts as a structural element supporting the central staircase and bridge. The extension from central staircase area to the sports ground on the north and cafeteria on the south side is connected by a double height space, which is well utilized by the students during breaks.

The support structure is designed using deck slabs with in-between walls being non-load bearing. This creates design flexibility wherein classroom modules can be combined and divided easily based on the altering capacities. Cross ventilation is of utmost importance for a structure of this nature. To avoid heat buildup inside the structure, large ribbon windows are provided all across. Thin slits between service block and classrooms suck the wind into the court area and louver panels at the terrace level take the hot air out. This keeps the court cool throughout the year. The site context of hilly terrain all around was replicated in the facade design to keep uninterrupted view from the classrooms and also as sun shading elements. This double skin further adds in keeping the building cooler and to avoid water splashes during heavy rains. 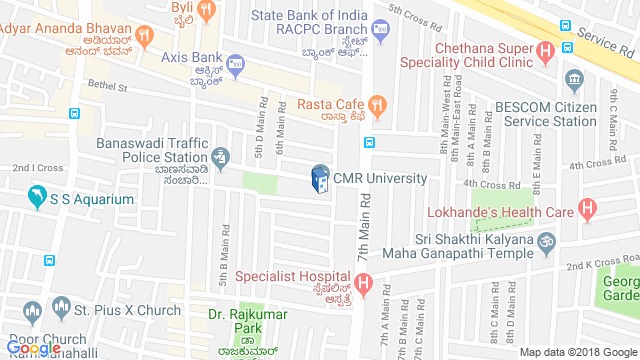 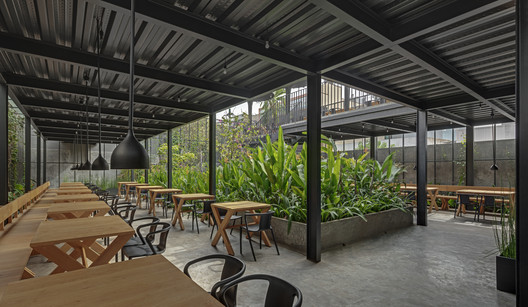 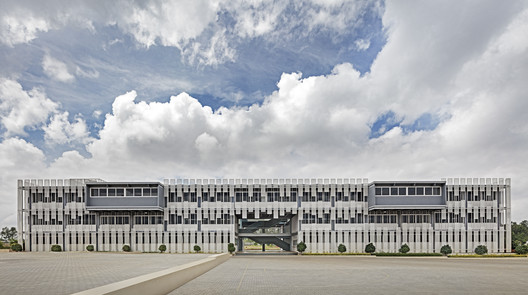