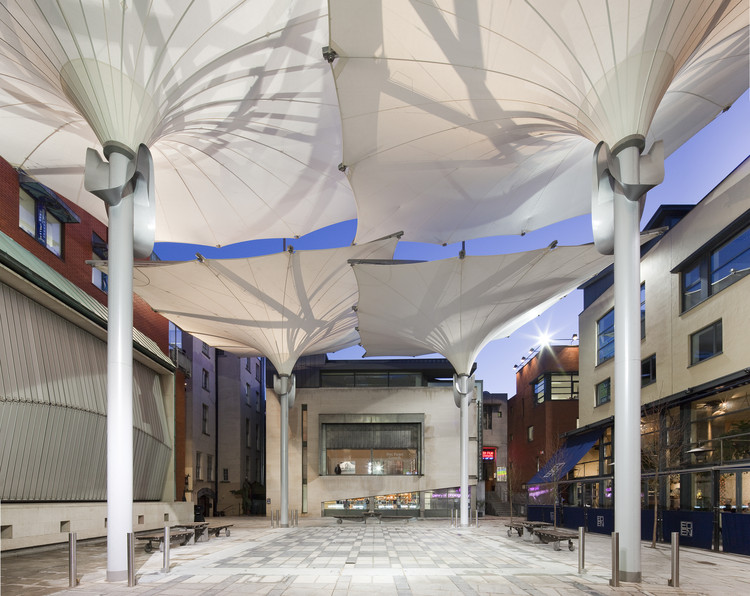 Text description provided by the architects. There is a saying in Ireland that you can have ‘four seasons in one day’ – from warm spring sunshine to intense summer light, and from lively autumn gales to a sudden wintry shower. Because Irish skies are constantly changing, Seán Harrington Architects was commissioned to design an innovative solution to provide a convertible weather covering over a popular public square in Dublin’s Temple Bar area.

The landmark ‘Umbrella Project’ was recently installed in Dublin’s trendy Temple Bar area by Swiss-German manufacturer MDT-Tex, a market leader and innovator in outdoor coverings. The four umbrellas were on a four-day journey from Germany, where they were engineered and manufactured. The bespoke design comprises of a 21-metre high steel structure, which supports an asymmetric tilted umbrella, measuring approximately 11-metres by 14-metres. The closed umbrellas are elegant slim objects of sculptural beauty, with the canopy fabric encapsulated by the umbrella arms, inspired by bulrushes, reaching for the sky. Opening within approximately 7 minutes, the four umbrellas overlap like flowers to provide a continuous cover for Meeting House Square, the heart of outdoor cultural activity in Dublin. Floodlit from above through the translucent Teflon fabric, the square can be atmospherically lit in different colour moods. Audio speakers as well as water and electricity supplies are incorporated for maximum usability.

The €2.4 million project was commissioned by Temple Bar Cultural Trust (TBCT), following a public competition, to mark the 20th anniversary of the urban regeneration of Temple Bar, which has won many European awards. Meeting House Square is Dublin’s most important public cultural square, hosting a wide-range of outdoor events from organic food markets to open-air theatre, popular film screenings and concerts. In the past, events were (Irish) weather dependent and often subject to cancellation.

Commenting on the design of the Umbrella Project, Dermot McLaughlin, Chief Executive Officer of TBCT said:  “Our design objective was to retain the sense of openness and exterior space that characterises Meeting House Square. The structure of the umbrellas was required to harmonize with the existing modern architecture and we are delighted to add Seán Harrington Architects to the list of distinguished architects whose work has defined Meeting House Square.”

Seán Harrington remarked  "Working in close harmony with MDT, and with solid support from our client, together we have produced an innovative, unique, ambitious, and beautifully engineered solution that will help fulfill the great potential of the this city square, and make it "weather-proof" !

Dick Gleeson, Chief Planner of Dublin City Council praised the project: "The wonderful new sculptural columns and dream catcher rainscreen raise the spirit of the City and embody Dublin's commitment to innovation and to be a prototyping and trialing city" 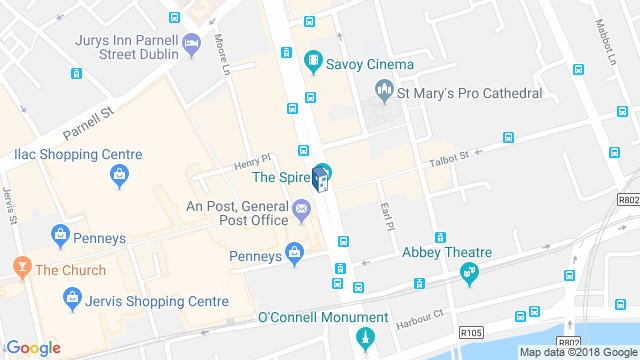