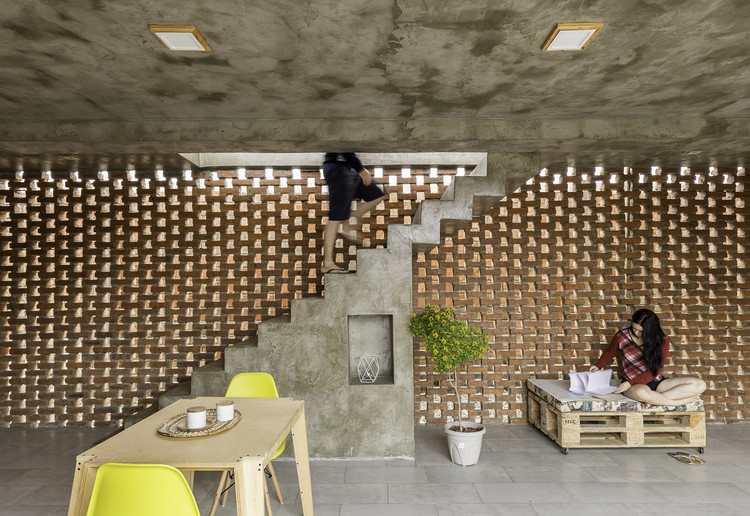 Text description provided by the architects. An architecture that re-appropriates the idea of traditional and flexible as a way of dwelling in the city.

The project was to capture the essence of the environment, the lifestyle.

Stilts House, located in Villamil, Guayas province, Ecuador, a satellite city of Guayaquil with a population of 33.560 inhabitants, where at the time of the colony was a port of fishermen settled on ancient indigenous populations while maintaining the tradition today, in 1982 the UNESCO declared General Villamil Beaches as the second best climate in the world after a mountainous place in Australia, it is also known for its great work of local labor craft.

It is proposed in its composite surround this with baked bricks that are also a traditional material in the local area, with some of the main objectives, do not use glass in their windows, incorporating traditional elements such as chazas, where it allows ventilation and the shadow that are necessary for the tropical climate of the place.

It occurs in a horizontal plane high; lightened by a system of pillars of teak which serves to support the breadwinner walls and cover, leaving it to the naked on the volume of " private"  aiming to develop through a proprietary architecture of the tropics, a proposal that meets the needs of the client; on the ground floor, and integrated with the outside and their day-to-day activities, there is a social area that closes in on itself, and opens toward the interior of the house as a rest area with hammocks. This will generate micro-climates, through the material and its new features.

It is suggested with the material, the architectural program of project, highlighted with different logics of implementation of brick to provide privacy and permeability.

Define a response of urban housing that through different strategies such as the application of principles of sustainable design, are still in the process of searching for ways to question the possibility of having a solution of city closest to reality, to our traditions and the optimization of resources.