Architecture can give you a headache. That sentence probably doesn't sound surprising for anyone who has dealt with the stress of practicing or studying architecture but, increasingly, psychologists are beginning to understand that you don't need to work on architectural designs for buildings to cause you pain. In an interesting article published by The Conversation, Arnold J Wilkins, a Professor of Psychology at the University of Essex, discusses how discomfort, headaches, and even migraines can be caused or exacerbated by simply looking at certain visual stimuli—with the straight lines and repetitive patterns of urban environments singled out as the main culprit.

As Wilkins explains, our brains have evolved to process images of the natural world. His article describes a number of ways to measure how hard the brain works to process visual information, from modeling a simple neural system on a computer to measuring the oxygen usage of people's brains when they are looking at images. In both cases, the evidence suggests that the brain works harder to process images of buildings than it does to process natural scenes. In some cases, this extra workload can cause physical discomfort, pain, and even migraines.

But what is it about urban environments that causes this extra workload? Wilkins' research suggests that the answer can be found in a mathematical tool known as Fourier Analysis. Fourier's work is arguably most well-known in the context of modern communications: the "ones and zeros" of digital transmissions are actually composed of a superposition of smooth analog sine waves, a technique that has its origins in Fourier's work in the early 19th century.

However, while a human face and other natural images might require the addition of many sets of very narrow stripes, the Fourier breakdown of an image of a building is likely to be dominated by a small number of very dominant stripe patterns—typically, horizontal stripes of the floors and vertical stripes of walls and columns. Wilkins describes this difference like so:

In nature, as a general rule, components with low spatial frequency (large stripes) have a high contrast and components with high frequency (small stripes) have a lower contrast. We can call this simple relationship between spatial frequency and contrast a 'rule of nature.' Put simply, scenes from nature have stripes that tend to cancel each other out, so that when added together no stripes appear in the image.

It's the impact of these monotonous stripe patterns that are the source of headaches and other problems discussed. And unfortunately, such patterns are becoming increasingly common in architectural design. Wilkins singles out "stripes on doormats, carpets, and escalator stair treads" alongside other interior finishes, but as building designs become larger and more driven by structural efficiency and cost, repetitive stripe patterns are becoming more prevalent in the very structure of buildings themselves. An architect's instinct can also sometimes exacerbate this problem, as they seek to express this structure artistically.

In his conclusion, Wilkins suggests that "perhaps it’s time for the rule of nature to be incorporated into the software that is used to design buildings and offices." But before this happens, perhaps architects can simply consider this phenomenon more carefully in their designs.

Click here to read Arnold J Wilkins' article in The Conversation in full. 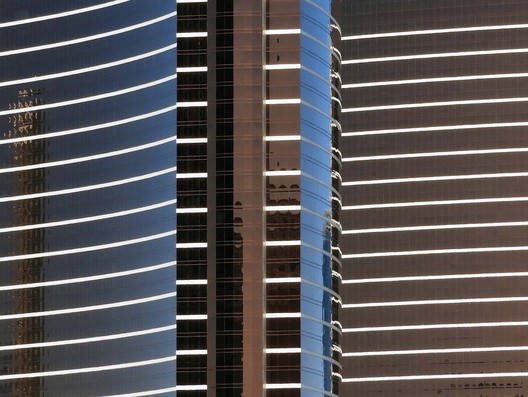