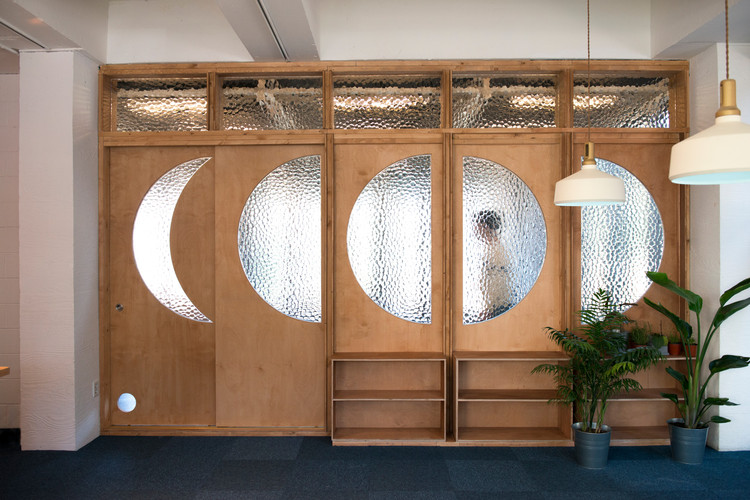 Neat yoga studio plus cafe located in a quiet residential area.
The client’s request was very simple. They were planning to run a cafe plus yoga studio in a space of about 100 square meters, and wanted to design it properly so that these two areas are well settled. They asked to divide not-a-big space into two parts, make a proper separation of two spaces with different features, and make it possible to appreciate the park in the east even indoors.

I divided interior space into two, east and west, and for the yoga practice, eastern side was utilized as it is connected to the park. When it is sunny, they can open the folding door located on the side facing the park and practice while feeling the warmth. During weekends without class, this space can be used as cafe space with tables on the floor where the guests can stay while looking over the park. In the western part where main entrance is located, there a space with 3-4 tables which is used as both lobby and cafe, and the facing kitchen was designed to be open so that the space can be felt more spacious.

Moon Door. Searching for good boundary
‘Moon Door’ which divides cafe and practice room is boundary of these two spaces, and is the first thing that one come across when entering the room. Initially the client wanted to have a spatial device such as curtain or folding door which could be used to fully open the space when needed. However, as curtain is not appropriate for soundproofing, and folding door gives their distinctive mechanical sensation, the client wanted to try other installation.

So the next suggestion was sliding door. It works calmly in the mechanical sense compared to folding doors, and its fixed wall part provides physical boundary unlike curtain. Opaque glass was used to provide sense of focus during practice, while connecting inside and outside even when the door is closed. The reason of using moon shape for the door was to give more impressive face that is generated when simply opening and closing door, while having analogy of lunar cycle and yoga practice.

As material exposed to the surface, namely finishing material, I wanted to utilize something that makes the best use of its own intrinsic nature. Considering the park particularly, it seemed that such naturalness would match well with yoga studio. As a result, it was mainly made of plywood, roasted bamboo, and terrazzo type concrete bloc. The client wanted to create an image wall, especially mandala that would work as a point inside the practice room, but malada with strong image could ruin the unity of the space. What I did was to create simplified madala by making hole in the concrete block. 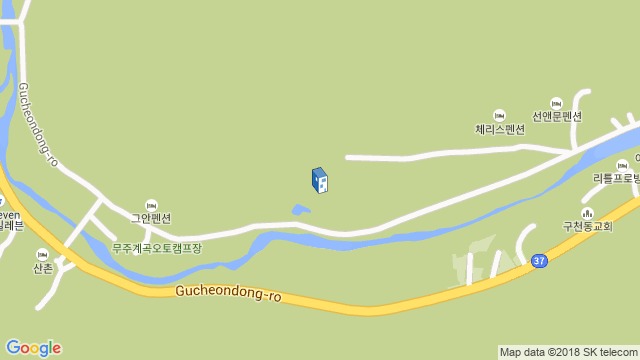