Text description provided by the architects. RAMOPRIMO re-thinks new visual identity and interior space for LEEGE offices in Beijing. The concept for LEEGE project tries to push the boundaries of the traditional office environment by re-thinking the relationships between all office functions. The space is designed as an empty white page where different elements, sliding walls and volumes are placed freely, like a combinatory game or a playground where people is free to move and choose new paths.

LEEGE is a rapidly growing Beijing based company providing local assistance for planning and managing equipment for heating, ventilation, air and water control. The 600 square meters space is located in an office block facing the renovated site of the former old Imperial Granaries from latest Qing Dinasty.

The concept combines four main suggestions: open up the space, to ensure visual connections between the parts, providing the space of a wider breath and making it look larger; freedom of movement, facilitating creation of different working groups and encouraging exchanges among employees; no hierarchy, by abandoning the idea of strong division of executive and open space, while exploring new and innovative ways of working; an office like a cafe’, with the relax and pantry spaces to become the functional core of the space.

This last point comes directly from the client’s background, who’d like his office to be informed by other creative fields and partially look as a comfortable living room, characterized by art gallery accents where people feels a creative and relaxed atmosphere.

The answer to this challenge was to create an open system where different functions and objects create a contemporary ever-changing working environment, where creative work can be inspired by a flexible and stimulating space. The different elements, characterized by a coordinate use of materials, graphics and colors, respond to different needs, while the functional program has been widespread in a balanced combination of volumes and open voids.

Main Project Elements
The layout is organized around the central straight yellow counter which will contain all bar and pantry functions, becoming at the same time a main “public” back-bone for the whole office.

A built-in partition line, colored with brightly hued blues, divides executive office rooms and other private rooms from the large open spaces and public areas. The blue strip is a long interactive interface running trough the office and containing shelves, seating corners and sliding walls. The mainmeeting room is placed along this line and it can be open completely becoming an extension of the central cafe’ space. On the opposite site is located a charcoal grey media room featuring a retractile theatre stage, which can extend or close according to different events.

A long continous white filing storage cabinet is placed along the entrance wall, occupying the largest side of the office with sliding doors featuring a surface with regular polka dots pattern, hiding special areas such the server room and some multifunctional employee room for little relaxing breaks. Large partition panels slide on trail mounted on ceiling. They have been decorated by using traditional Beijing bricks, then painted to create contemporary patterns, as a reminder of the heritage site where the office is located. Circle sofas create little centralities where people can relax or gather for temporary informal meetings.The two main open space areas are characterized by long working tables, to facilitate the communication between different departments while working on shared projects.

A continuous striped ceiling made of white louvers strongly characterizes the whole image of the office, providing a diffuse sound absorbing element which is rhythming the space and allowing the view to the existing concrete ceiling, where all heating, anti-fire and conditioning systems are located, majority of which provided directly by LEEGE company.

The COLOR scheme is also a conceptualization of the company’s values towards nature. The main color is blue, representing the purity and cleanliness of the two main elements of WATER and AIR. A large blue sky is the first image of the logo presentation and the background of the company presentation book. As counterpart to this main characterizing color, we added the YELLOW color to enlighten the meaning of energy and power. Black and white are the secondary colors for all other standard graphic applications.

The LEAF is the evocative mark we design as complementary graphic elements. It has a very high symbolic meaning: nature, growing, change and re-birth. The LEAF can be use alone, as a "brand's signature mark", or it can be combined to create graphic patterns. There is a direct connection between this graphic element and the space identity of the new LEEGE office, where patterns of leaves have been use to dot the walls and ceiling of meeting rooms and community spaces.

BLUE, YELLOW, BLACK and WHITE are the main colors of LEEGE visual identity. The same colors are also characterizing walls and elements for the interior space in the new office, where space design and Visual Identity work together as a whole to create an visual result characterized by uniqueness, simplicity and immediate delivery of the company's values message. 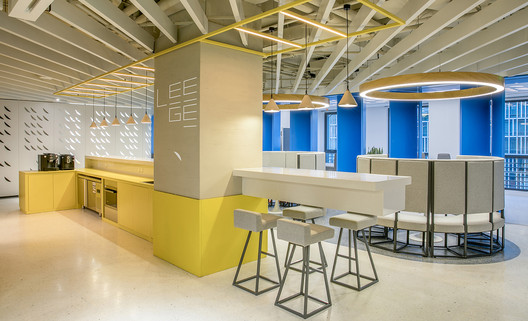