Last October, Germany-based Gewers Pudewill was awarded first place in an invited competition to design the Stream Tower, a new office high-rise in Berlin. The 24-story scheme elaborates on a vertical folding theme expressed through the slabs and façade, creating a programmatic sculpture depicted in recently-unveiled imagery.

Situated next to the city's Mercedes-Benz Arena, the tower will reach a height of 300 feet (90 meters), and a floor area of 430,000 square feet (42,000 square meters). Upon completion, the scheme will host the popular online fashion retailer Zalando.

Starting from the ground level, each floor folds itself upwards to articulate the slabs and exterior walls without any breaks. The tower is designed to have only two floorplans, alternating as the tower rises. While the folds alternate from east to west, the north and south facades are glazed to offer views over Berlin, becoming more spectacular as the scheme rises above its 7-story neighbors.

Stream Tower also features two outdoor terrace spaces at each level, orientated east and west for solar gain, in addition to a variety of lounge and meeting spaces designed to create a forward-thinking and modern office space. 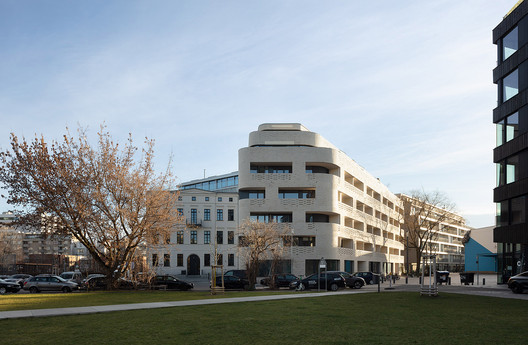