Lithuanian city Panevezys will have a new cultural hub thanks to the winning design of architecture firm, IMPLMNT. The proposed design of the Stasys Eidrigevicius Arts Centre, which will be built in the northern part of the city center, won the competition due to its function, location, architecture, and the social/economic value it will be adding to the city.

The center will take the place of an existing movie theater, a historic landmark in the Lithuanian city. After performing structural analysis on the existing theater, a study of the conditions indicated that it can no longer be preserved or saved. Keeping in mind the importance of the movie theater to the city, the architects at IMPLMNT decided to draw inspiration from the existing building, as well as use its proportions to create the newly-designed structure. 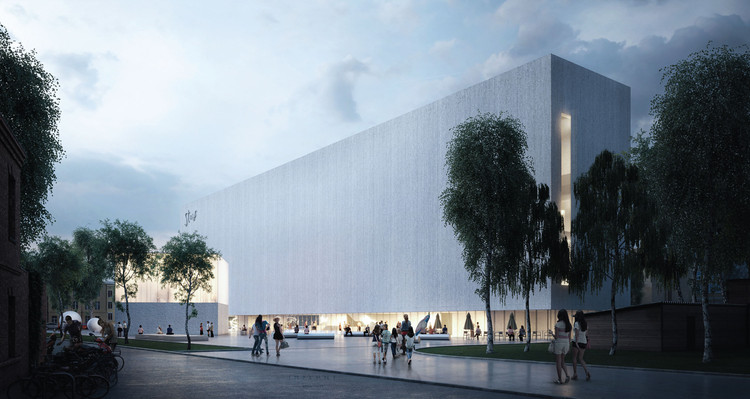 The location and plot of the newly designed cultural center are of great value. The project acts as a connection between the streets of Krantas and Respublika, bringing together western attractions centers and Oxbow lake. While designing the new structure, the architects studied the orientation of the architecture very carefully. The allocation of the volume created a large public open space on the southern side of the plot. This space is planned to have a non-commercial cinema hall, a function that locals admire and value greatly because it keeps the city’s culture intact.

The center is divided into two zones, an active leisure in the northern area, and a creative-urban space in the south. The center will also include an outdoor exposition area, which will accommodate concerts, performances, street art, an outdoor cinema, and cafes.

The architecture’s design was inspired by the artworks of Stasys Eidrigevicius. The architects observed two characteristic motives in his work, which are the “continuity of lines and shapes, and the interaction of the objects with each other, their connection and transformation.” This interpretation was translated onto the structure, basing the overall design on connections and surfaces.