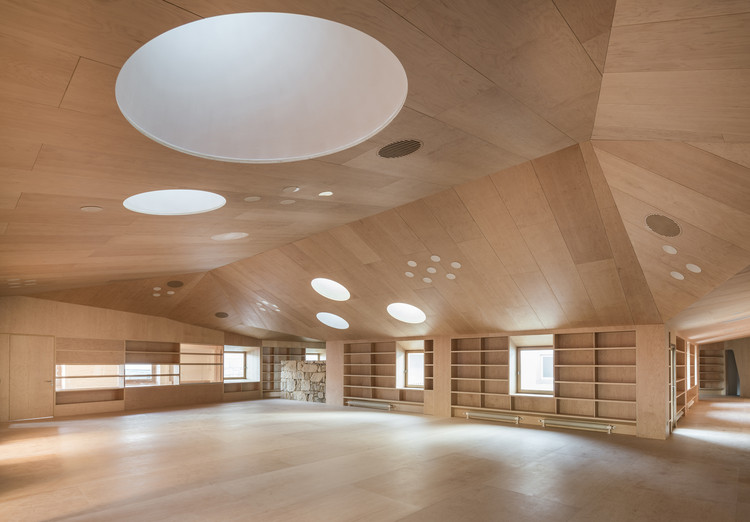 Text description provided by the architects. In 2010, when Murado & Elvira Architects won the competition to design the Public Library and Historic Archive of the city of Baiona (Spain), they decided   to design a place that would convey a  sense of domesticity to its users: they came  up with the idea of a warm wooden dress, tailor-made  for the ancient building. A dress that covers the interiors of the architectural body, leaving the exterior almost unchanged. The old Sancti Spiritus Hospital thus reconquered its original role, by becoming a new home for scholars and readers. And for tourists too. The city of Baiona, located on the west coast of Spain, is located along the Camino de Santiago and is visited every year by thousands of pilgrims. In  addition, the Baiona Historic Archive is one of the most relevant in the area, preserving  documents dating back to the discovery of Americas. Baiona was in fact the port where La Pinta, one of the three caravels led by Christopher Columbus towards the New World, arrived on its way back in 1493.

An incipient hospitality expands into the library. Accommodated within the former Sancti Spiritus Hospital, an existing structure built in the 17th century behind the ex-collegiate church of Santa María, the Baiona Public Library is a two-level building embedded in the sloped historic city  center with a garden and an inner courtyard. The  building is listed, protected as a 'Bien de Interés Cultural'(Heritage of Cultural Interest). Despite its status, it has suffered major  alterations in the course of the centuries, some affecting the patio and garden, that had come to lose their significance; others heavily modifying the interiors, that due to an intervention occured in the 1970s were obliterated and deformed.

The renovation project by Murado & Elvira aimed to restore the desirable role of the outdoor spaces and redefine the historical identity of the building through the careful design of a succession of rooms in which to host its new public functions.

“When we first visited the old building we felt  the need for our project to create a new interior identity, connecting and giving continuity to the old structures”  Clara  Murado and Juan Elvira.

History has been carefully observed and questioned by the  architects. This can be clearly perceived in the spacial sequence that guides visitors from the open spaces of the urban fabric to the most intimate condition offered by the reading rooms. On the ground floor a large hallway transverses the building like  an indoor street that leads to the patio and the  garden. It is a real introduction to the new nature  of the building, an immediate and unexpected overview of time that passes through it. This main axis is marked by a thick stone wall, reminiscent of the old granite structure, that gathers archeological pieces from the original building, bonding memories and heritage to the new function of the building.

The solid and material wall structure is counterbalanced by the soft and warm appearance of the wooden box containing the Historic Archive and all the service rooms to the right of the entrance path. The building thus immediately reveals its dual nature and its ability to reaffirm its vocation for welcoming visitors.

To the other side, opening  towards the courtyard, is the children’s library, with a distinctive irregular shape that gives it a playful identity. Murado & Elvira used the  asymmetric perimeter of the building to  their advantage in order to design what may be the most characteristic room of the complex. Its position allows sunlight to come in, while giving to the kids a quiet and safe place to play inside. Textile floors offer a comfortable surface to sit on while some folding surfaces, made of the same material, give shape to inclined planes  to recline upon Similarly  to the Historic  Archive, rooms are completely wrapped in  warm maple wood: the architects  used curved wooden walls to integrate shelvings and some openings to hidden spaces  behind, such as a wardrobe and a puppet theatre.

Three  stairs connect  the ground to the  upper floor, where the  main reading room is located:  two outdoor stairs in the courtyard,  one indoor stair directly accessible from  the inner accessway. Encircling the patio, this  open space, where the wooden inner envelope is celebrated,  is composed of a series of interstitial rooms, individual study  alcoves, bathrooms, offices and bench reading rooms. A double maple  wooden skin  embraces  this space  completely, from  the floor to the vertical walls. The  same maple wood has been  used also for the ceiling in  a triangulated surface that, while  describing an ever-changing volume, adapts  to the structure and to the dimensional needs  of the mechanical systems. All around the reading  room windows open up to the garden, surrounding the  North and East sides of the facility. The garden is accessible from the main entrance through  a hallway.

A  Warm and Articulated Architectural Space.
The  warm and  light-colored  maple wood surfaces  that cover progressively  the inner surfaces of the  architectural body, as with an  epithelial tissue that can protect  but also transmit emotions, convey a  sense of domesticity and coziness to the spaces.

They  create  a continuum  among the various  rooms of the complex, thus overturning the more conventional design strategy of providing a building with  a unitary external skin. This inner  envelope emerges as the most distinctive characteristic of the library designed by Murado & Elvira Architects. While from the outside the Sancti Spiritus Hospital seems to have apparently remained untouched  by their renovation project, when stepping inside one is immersed  in an unexpected and surprising environment. This new skin rejuvenates the building, which is for the most part mono-material, without erasing its history, making the Sancti Spiritus Hospital a place where everyone can find his own spot, a pilgrimage center for citizens and tourists.

Emblematic in this sense is the ground floor, where the contrast between the maple wood and the grey of the granite stone welcomes users into a space where the past merges into the present. The archaeological finds embedded in the stones recall memories of the ancient Sancti Spiritus Hospital and are confronted with the wooden box of the Historic Archive, where the heritage is now preserved.

On  the upper  floor, instead,  where the spatial  organization recalls  the historical sequence  of rooms, the wooden surfaces envelope the spaces completely, from  floor to ceiling, conveying a surprising  condition of warmth. Here, a double maple wooden skin envelopes the entire floor, opening  a concentric functional band composed by a series  of interstitial rooms: individual studies, bathrooms, offices  and bench reading rooms.

Furniture Originates from the Facades.
The  scale  of the  reading room  oscillates between  the affective and domestic condition  of the furniture  and the grandness of the big ark embracing individuals  and things. The design solution adopted  for the interiors contributes to making spaces homogeneous yet, at the same time, immediately recognizable.  The resulting environment is both graphic and spatial. Inner facades  are cut out and the cut-outs become tables, whose shapes and materiality  define a continuum between the scale of the building and that of the furniture,  without apparent distinction.

Murado & Elvira also designed the way-finding signage and the logo for the Baiona library. The wooden surfaces are cut and engraved with a similar technique  to the one used to extract the furniture directly from the walls. They also designed unique pieces, such  as the lamps for the garden, conceived as curious devices  to be used by both humans and non-humans, with a fountain, a plate for birds to drink water from and a mirror. 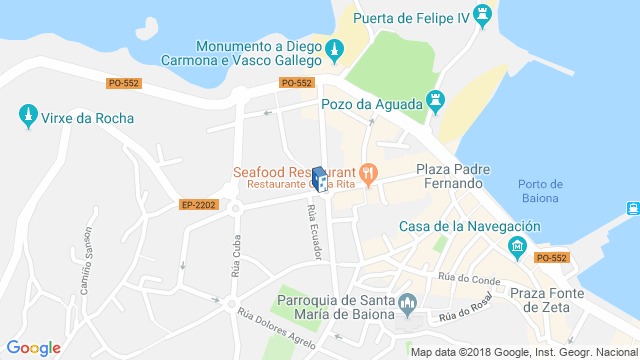 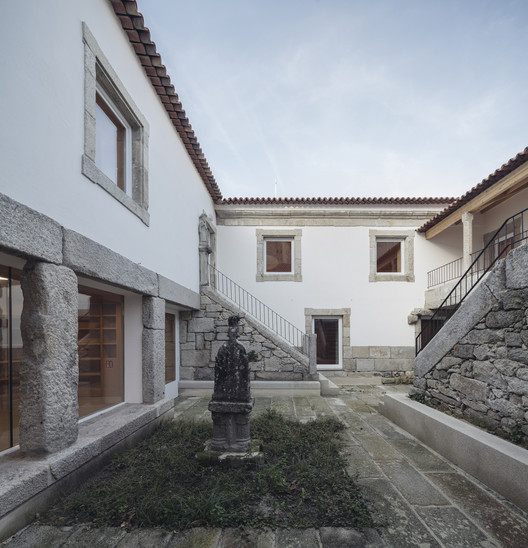 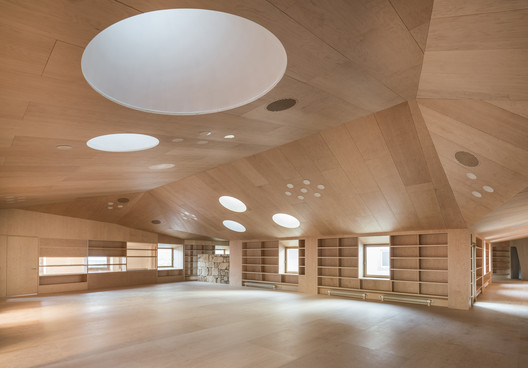