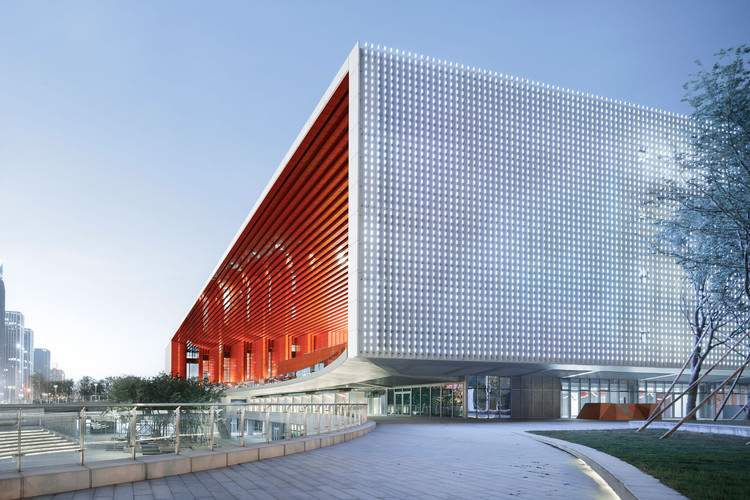 Text description provided by the architects. Yiwu is famous for small commodities. Small and medium-sized enterprises are densely concentrated in this place where the private economy is highly developed. In terms of urban construction, this means that the city is filled with a large number of homogenized and small-scale buildings featuring high density.

Local citizens have a desire for iconic city architecture and open places for public activities. After being included in the central city planning of Zhejiang province, Yiwu has begun to take firm steps toward becoming an international metropolis and hoped to take constructing Yiwu Cultural Center as an opportunity to declare to the public its cultural confidence featuring openness to the international society and the future.

Yiwu Cultural Square is a large-scale cultural complex combining various functions of culture and entertainment, education and training, sports and fitness, etc. Its design, which is minimalist with huge building volume, differs from that of ordinary buildings in the city. Its center is not a grand indoor hall, but a three-dimensional courtyard where a sunken square is linked with a roof garden through ramps and big steps.

The space is organized with circulation and transforms step by step, and the landscape presented to people can be different as they walk around this place. Such a design technique learns from the space organization of traditional Chinese garden and builds on it.

At the main entrance, the huge roof is like the clouds in the sky, and the huge gray space under the entrance is derived from the traditional public space model from Jiangnan regions, such as stage, ancestral hall, etc. This meets the needs of public cultural activities of Jiangnan regions.

The design of combining the sunken square and the audience area is suitable for organizing public cultural activities with Chinese characteristics. When people walk across the long and big steps and reach the roof top which is open and wide, they are able to see the beautiful views from the distance: Yiwu River, Diaoyu Rock, and Lion Mountain.

The minimalist facade along the river can change into a huge screen after nightfall, and this changing screen can be even more glamorous with the gleaming reflection of Yiwu River, becoming stunning scenery of the city. 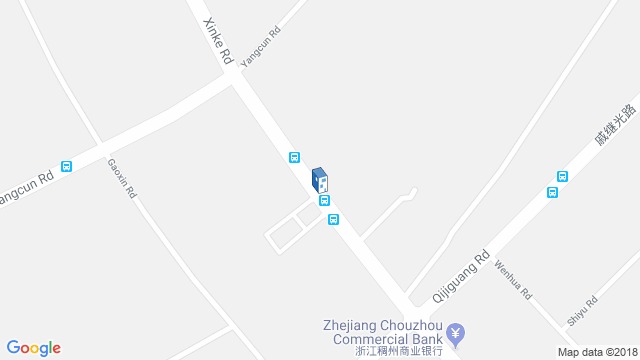 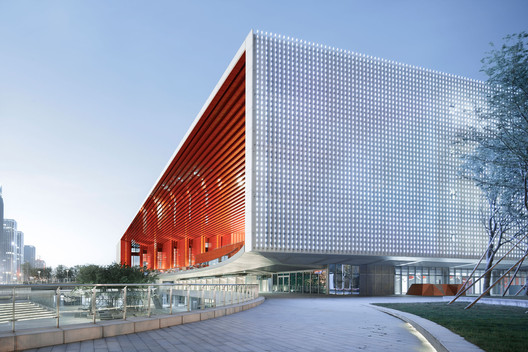